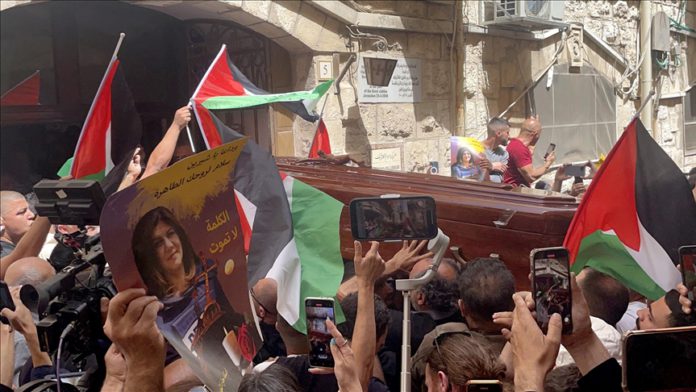 Speaking to Anadolu Agency, the Director of the Gaza-based Palestinian Centre for Human Rights Raji Sourani, said Akleh was reporting the true situation on the ground, which did not favor the narrative of the occupiers.

Sourani argued that the journalist was killed by Israeli forces for her high-impact journalism, as she was one of the popular names in Palestinian media. Her coverage resounded in Arab countries and beyond, he added.

He said that “by killing journalists,” Israel is trying to send a message that every reporter whose reports contradict its discourse, might meet the same fate.

“So, Israel has a long criminal record. We expect that the chief prosecutor of the International Criminal Court (ICC) will make out a case on this issue and thus the rights of the Palestinians will be defended,” he said.

The human rights lawyer Raji Sourani said that the “murder” of a veteran journalist will bring a new dimension to the Palestinian-Israeli conflict.

He said the killing of Akleh “ensured the national unity of Palestine,” adding that the Arab world and the international community became a “united voice” on this issue.

Drawing attention to the double standards of the international community regarding Palestine and Ukraine, he said: “The US and the EU arranged experts at the ICC within two months to condemn Russia’s intervention in Ukraine. They achieved what we have failed to do over the past 25 years.”

Ramy Abdu, the chairman of the Euro-Mediterranean Human Rights Monitor, said that Israel killed Akleh as part of a systematic targeting policy against the media.

Arguing that journalist Akleh was not shot randomly, he said: “On the contrary, the press, particularly Al Jazeera TV Channel, is on the target. Al Jazeera’s reporting of events with its extraordinary method disturbs Israel.”

Abdu noted that Israel had not foreseen that the “murder” of Akleh would make such an impact both in Palestine and the international arena.

Moreover, the Director of Legal Affairs and Policy at Skyline International for Human Rights, Mohammed Imad said: “Israel is preventing Palestine from conveying the facts to the international community. Israel committed this murder despite knowing the international law that protects journalists.”

Abu Akleh, 51, served as one of Al Jazeera’s journalists covering the situation across the occupied Palestinian territories over the past two and a half decades.

Al Jazeera accused Israeli forces of deliberately killing its veteran journalist in the occupied West Bank on Wednesday, while the Israeli army said that its initial assessments indicated that she was “killed by Palestinian gunmen.”

Also, the Palestinian Authority confirmed that Akleh was “shot dead by the Israeli army.”