TurkishPress
Home News Khojaly: One of humankind's 'most terrifying tragedies' 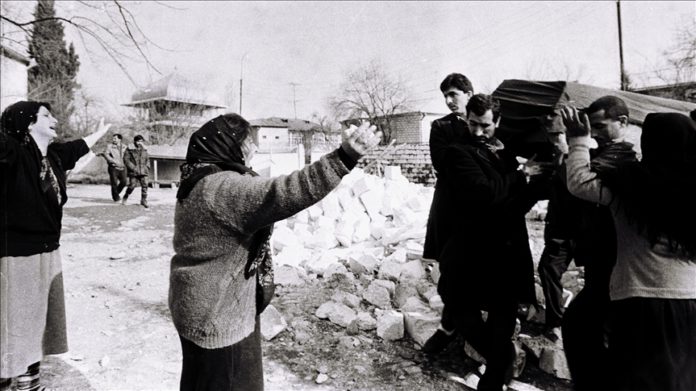 The 1992 Khojaly genocide is not only one of the darkest pages of Azerbaijani history but also “one of the most terrifying tragedies” of humankind, Azerbaijan’s envoy to Turkey said, marking the 29th commemoration of the tragedy.

On the night of Feb. 25-26, 1992, Armenian forces committed a massacre — known as the Khojaly Genocide — of ethnic Azerbaijanis in Khojaly, a small town in the Nagorno-Karabakh region of Azerbaijan.

“The bloodshed in Khojaly cannot be evaluated separately from Armenia’s aggressive actions towards Azerbaijan, which commenced in 1988.

Armenia, influenced by the Dashnaksutyun ideology promoting a euphoric ‘Great Armenia’ illusion, tried to utilize the ‘historical moment’ of the USSR’s downfall pursued by the state formation turmoil in Azerbaijan in the early 1990s,” Ambassador Khazar Ibrahim told Anadolu Agency in an interview.

During the two-hour Armenian offensive, 613 Azerbaijanis — including 106 women, 63 children and 70 elderly people — were killed and 487 others critically injured, according to Azerbaijani data.

Eight families were completely wiped out, while 130 children lost one parent and 25 children lost both. Another 1,275 people were taken hostage, and 150 of them are still missing.

Ibrahim said that Human Rights Watch described Khojaly as “the largest massacre in the conflict.”

“Besides, it could be the first time when the mask of Armenians — who had always cried wolf — fell, exposing their real faces,” he said.

Having “territorial claims” not only to Azerbaijan but also to other neighboring countries like Turkey and Georgia, Armenia wanted to achieve its “grand plan of expansionism” dating back to a century ago, Ibrahim said, adding that accordingly, they attempted to implement the “long-projected intention of the unilateral secession” of Nagorno-Karabakh from Azerbaijan and its annexation to Armenia.

As a result, around 20% of Azerbaijani territories were occupied and nearly 800,000 Azerbaijanis were forcibly expelled from their ancestral lands, he said.

“Henceforth, this plan cannot be conceived as simply a strategic endeavor of geographical expansionism of one country. Indeed, it was overtly nourished by animosity towards Turks as a nation and had a nationalist ideological background.”

Not surprisingly, Ibrahim said, the perpetrators of the Khojaly Genocide depicted the “mass carnage” as a “revenge act,” revealing the deliberate intention lying behind “annihilation” efforts.

He underlined that along with so-called revanchist feelings, Armenia, through such “well-organized and well-strategized ruthlessness,” wanted to “intimidate” Azerbaijan and “give a lesson” to discourage the Azerbaijani people from fighting for their lands in the future.

“Time has proved that all these calculations of the Armenians were in vain and nothing could break the courage of the Azerbaijanis to liberate the lands and restore our territorial integrity. On the other hand, the time has also shown that the culprits of the Khojaly Genocide not only failed in their estimation but also will convey this shameful stain until the end of their lives.”

Ibrahim emphasized that the international community is first responsible for giving a “righteous legal estimation” to the Khojaly Genocide, adding the offenses committed in Khojaly entail both Armenia’s and “individual criminal responsibility” under international law.

He said that as a consequence of an official investigation by Azerbaijan, the Armenian assault on Khojaly was evaluated regarding the Convention on the Prevention and Punishment of the Crime of Genocide.

Here the elements of a genocidal act, including killing and causing serious bodily or mental harm as well as the genocidal intent to annihilate, in whole or in part, a group distinguished on racial, ethnic, national, or religious grounds were detected, he said.

“Currently, 17 countries and over 20 states of the US recognize Khojaly as a genocide. Nonetheless, it is far from the real worth Khojaly should be given,” he added.

Ibrahim stressed that the “most devastating fact” about the Khojaly Genocide is that the perpetrators of the carnage “represented in the previous political and military leadership of Armenia” confessed their actions and are left unpunished.

The Armenian leadership did not only “confess clandestinely” but also “boasted” with their actions, the ambassador said.

Ibrahim recalled the statement of Armenia’s former President Serj Sargsyan, who “without any regret” said: “Before Khojaly, the Azerbaijanis […] thought that the Armenians were a people who could not raise their hand against the civilian population. We were able to break that stereotype. And that’s what happened.”

Furthermore, Markar Melkonian, the brother of Monte Melkonian — who was one of the leaders of the Armenian Secret Army for the Liberation of Armenia (ASALA) terrorist organization — in his book said how the Armenians “teased” with the inhabitants of Khojaly trying to flee the town, Ibrahim said.

“Melkonian asserted Armenians’ violence that ‘soldiers unsheathed the knives they had carried on their hips for so long and began stabbing.'”

In Armenian novelist Zori Balayan’s Revival of Our Souls book, the “special mercilessness” of Armenians toward innocent children was described in detail, Ibrahim said, adding that here, the “sense of hatred” towards Turks as a nation can be felt.

“The February 1992 Khojaly massacre, as one of the most dreadful examples of recent history, despite all the evidence, witnesses and confessions of criminals still could not reach a fair trial in the international community, which encouraged the criminals to commit new atrocities,” he noted.

He went on to say that leaving the perpetrators of the Khojaly Genocide unpunished “discredits” the current international justice system.

“It is also an eminent humiliation for humanity in general,” he added.

The head of the Azerbaijani diplomatic mission in Turkey’s capital Ankara highlighted that it is not hard to understand the pain of the Khojaly victims, adding that “indeed, a tiny amount of empathy is enough.”

“Unfortunately, even in massacres like Khojaly, which was committed ruthlessly and openly, selfish calculations prevent some groups from assessing the situation within a moral framework,” he said.

The envoy said the Azerbaijani state and people always respectfully remember the innocent victims of the tragedy and continue seeking justice on all platforms for them, as well as for the other victims of Armenian atrocities.

He said they believe that “injustice anywhere is a threat to justice everywhere.”

“Therefore, ignoring the tragedies lived in Khojaly would certainly enhance disbelief in the current international system, deepening already existing cracks in it and encouraging oppressors in different parts of the world to commit crimes without taking into account responsibilities they are obliged to comply with,” Ibrahim concluded.