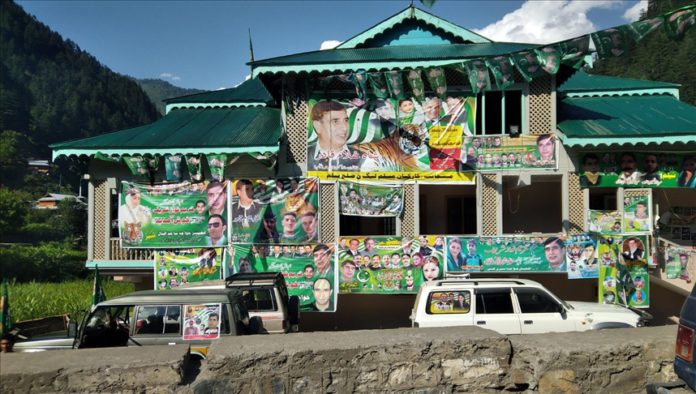 Over 3.2 million voters are set to elect the 53-member assembly of Pakistan-administered Kashmir or Azad Jammu and Kashmir (AJK) for a five-year term on Sunday.

More than 700 candidates from 32 political and religious parties are contesting for the 45 general seats. Out of the rest eight reserved seats, five are for women and three seats, one each for religious scholars, technocrats, and overseas Kashmiris. The members for these seats are nominated after the elections.

Out of 45 general seats, 12 seats are reserved for Kashmiri refugees who had migrated from the Indian-controlled part of Kashmir in 1947 and 1965 and are settled in various parts of Pakistan. Therefore, in the 10 districts of AJK, elections will take place on 33 seats only.

Out of 700 candidates, only 20 women candidates are contesting elections from general seats.

Pakistan Tehreek-e-Insaf (PTI) of Prime Minister Imran Khan has fielded 45 candidates. The party is seen as a favorite to form the next government given the tradition that the party ruling Islamabad, wins elections in Muzaffarabad.

In the 2016 elections, the party could win only two seats.

A former AJK Prime Minister, Barrister Sultan Mahmood Chaudhry, who is leading the party in the region, is the strong candidate to head the next government. He is contesting from his stronghold, Mirpur, a wealthy district of the Jammu division.

However, Sardar Tanveer Ilyas, an overseas billionaire, and a close confidant of Imran Khan has overshadowed Chaudhry. Ilyas, who is currently serving as an Adviser to the Chief Minister of Pakistan’s Punjab province Sardar Usman Buzdar is contesting from Bagh district.

According to political analysts, Prime Minister Khan’s aggressive stand on India’s scrapping of autonomy to the Indian-administered Kashmir in Aug.2019, can benefit the party in the elections.

However, the party’s average performance in terms of economy and failure to control the rising inflation is seen as a disadvantage for its candidates.

Led by Prime Minister, Raja Farooq Haider PML-N is contesting polls on 44 seats. Haider, whose many family members live in the Indian-administered Kashmir is an outspoken politician who has angered many because of his blunt remarks.

The infrastructure development, mainly construction of road networks across the AJK over the past few years is seen playing in favor of the PML-N. But not being in power in Islamabad, is its biggest disadvantage.

Haider is contesting from Muzaffarabad, the capital of AJK.

Another senior party leader, and Speaker of the AJK Assembly, Shah Ghulam Qadir is contesting from two seats from scenic Neelam Valley near the Line of Control (LoC), which divides the region between Pakistan and India.

Noreen Arif, a PML-N candidate from Muzaffarabad, is the only woman politician who has been elected to the state assembly twice through direct elections in 2011 and 2016.

The PPP had won the 2011 elections when it was ruling Islamabad. However, analysts predict a tough task for the party.

Sardar Yaqoob Khan, a former AJK president, and Chaudhry Latif Akbar, a former minister are leading the campaign for the party in the region.

Akbar appears to be in a strong position to win his seat from Muzaffarabad. However, Khan, who is contesting two seats in the Rawlakot district, is facing a tough challenge from PTI and PML-N candidates.

The PPP, whose leader, and former Prime Minister, Zulfikar Ali Bhutto had introduced the parliamentary form of government in the AJK in 1975, has ruled the region four times

Jammu Kashmir Muslim Conference is the oldest political party of the undivided Jammu and Kashmir, which was formed in 1931 in Srinagar, capital of India-administered Kashmir.

It has also ruled the region four times.

However, after PML(N) spread its wings in the AJK ahead of the 2011 elections, Muslim Conference lost a major chunk of voters. In the 2016 elections, it won only two seats.

District Bagh, the hometown of Atiq, is considered the party’s stronghold.

Jamat-e-Islami, one of the mainstream religious parties in Pakistan, has a sizable vote bank in the AJK, although the party has never been able to win more than a couple of seats.

The party is contesting on 30 seats.

Abdul Rasheed Turabi, a sitting lawmaker, was considered to be its strongest candidate. He has, however, withdrawn from the contest in favor of PTI’s Tanveer Ilyas.

Tehreek-e-Labbaik Pakistan (TLP), a party, which is banned in Pakistan is a new entrant in the AJK’s electoral politics.

The far-right religious group was banned by the Pakistani government in April this year for staging violent protests in major cities demanding the expulsion of the French ambassador over offensive cartoons of Prophet Muhammad published in France last year.

The party represents the Sunni-Barelvi school of thought, which has deep roots in the region.

Analysts say the party, although, not in a position to win any seat, may dent the vote bank of the right-wing political parties.

Jammu and Kashmir Democratic Party (JKDP) is the only woman-led political party in the AJK. Headed by Nabila Irshad, a local politician, and lawyer by profession, the party had fielded 18 candidates to contest its first-ever election. But later withdrew majority of candidates in favor of the PTI. The party has now settled to contest only from three seats. Irshad herself is contesting from Sundhnoti district.