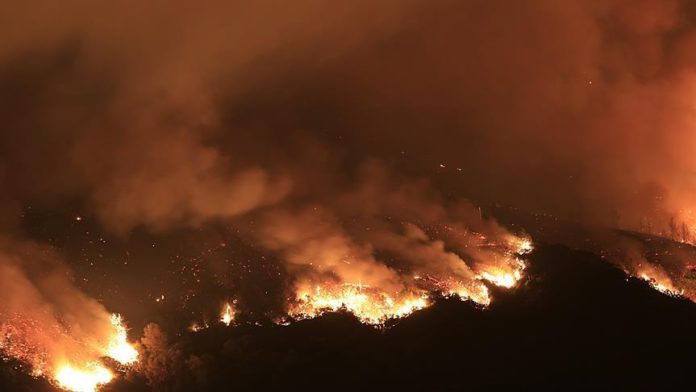 A fierce fire in Kenya that started on Saturday night has gone out of control, devouring 550 hectares of the Aberdare forest, which is among the East African country’s most important water catchment areas.

Rhino Ark, a charitable wildlife trust working in the Aberdare ecosystem, reported that additional trained firefighters were deployed by chopper to the southern fire line to contain the raging inferno.

Community members from the northern Aberdare forest in central Kenya were among the first responders to help stop the fire.

“Rangers from Kenya Wildlife Service and the Kenya Forest Service and community members are battling the wildfires in the Aberdare moorlands. An aerial recce conducted by Rhino Ark shows improvement,” the wildlife trust said.

Authorities in the area confirmed that over 550 hectares (1.359 acres) of forest have been destroyed by the raging fire.

Authorities say that the fire is spreading fast due to strong winds and dry vegetation as the area is suffering from a drought that has lasted for months.

According to the Kenya Wildlife Services, the forest not only provides water for most of Kenya but also provides a habitat for elephants, black rhinos, leopards, spotted hyenas, olive baboons, black-and-white colobus monkeys, buffalos, warthogs, and bushbucks among others.

In 2017 and 2018, massive fires swept across the Aberdare, killing animals and destroying vegetation.

The cause of the latest fire in the East African country is yet to be established but past cases have been blamed on human activity such as charcoal burning and honey harvesting which is common around the area.

Ukrainians observe 'Day of Unity' amid stand-off with Russia