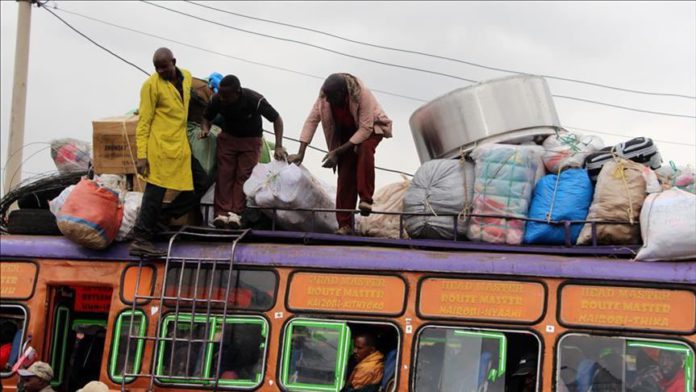 Many residents in the Kenyan capital of Nairobi are taking refuge in rural areas in the hope of beating the coronavirus pandemic and to avoid financial hardships in the cities.

But it has created anxiety in villages, where residents fear the wave of the pandemic was imminent due to unchecked arrival of people from affected counties.

Kenyan President Uhuru Kenyatta on Monday lifted the ban on travel in the worst-hit counties of Nairobi, Mombasa, and Mandera.

The announcement soon resulted in thousands of people flocking to bus terminals to escape to villages.

Carrying his belongings at the Machakos bus terminal, Shihemi Wasilwa Wetaba said he was leaving for his home village of Shamakhokho roughly 270 kilometers (168 miles) from the Nairobi.

On his head was a tied-up dirty and battered mattress, while near him lay a bag full of clothes and personal belongings, kitchen utensils and bed frame — a clear indication that he was not planning on coming back to the capital any time soon.

“I’m moving away from Nairobi because everything is expensive, I could not pay my rent of 5,000 Kenyan shillings rent [$47] and my landlord did not want to hear anything, opening cities from the lockdown came as a blessing to me,” Wasilwa said.

“The virus has destroyed all means of earning money. Everything is expensive and no one is working. Look around we are all leaving Nairobi, I would rather go to Kakamega [a town in Western Kenya], where I can rear cows and work in maize fields, “he said.

Speaking to Anadolu Agency, many people leaving the Kenyan capital said the pandemic has resulted in poverty and unemployment.

Cynthia Aoko who worked as a housemaid said that she was afraid of the disease that is why she wants to return to her village.

But this migration of people from cities has raised fears in rural regions, which had remained safe to a large extent form the pandemic.

“We don’t want them to come here because that will infect people in villages,” John Osuma, a resident from Kisumu county, told Anadolu Agency.

He feared that with such large-scale migration from cities, the rural areas will start reporting more and more cases and in the absence of health facilities pandemic may prove fatal.

“By bringing people who are carrying the disease to these sides, they are killing us. They will kill our elderly,” he said.

Even as many people are eager to travel, many bus companies are still not operating, awaiting permission form the government to proceed with their services. Those who are operating are charring exuberantly.

The government has indicated that all bus companies must adhere to health regulations and get a clearance from transport authorities.

Those who own vehicles are minting money to ferry passengers to the countryside.

“I have my vehicle which has five seats. I am allowed to accommodate three passengers,” said Richard Kariuki, a businessman who is heading to central Kenya.

Due to the necessary certification delays, many transporters instead of taking passengers have converted buses into goods carrying services.