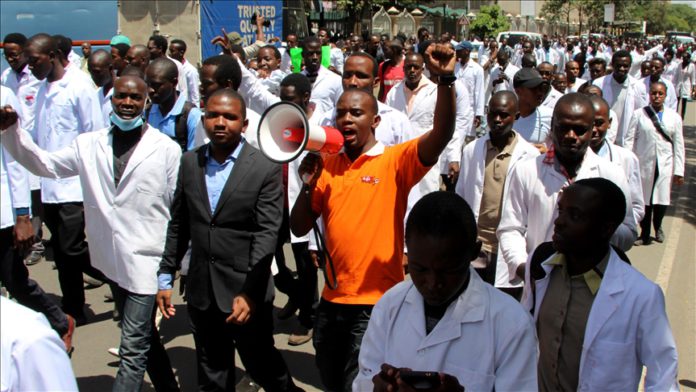 Kenya on Monday witnessed a health care crisis after doctors in the East African nation downed their tools, protesting lack of protective gear and inadequate benefits.

The Kenya Medical Practitioners, Pharmacists and Dentists Union has accused the government of neglecting them, and putting their lives at risk.

Chairman Chibanzi Mwachonda said the government has disregarded the welfare, safety and health of health care workers, adding that there is no provision of medical insurance, work-related injury benefits and compensation, and personal protective equipment, despite the coronavirus pandemic.

Health care workers have died, and are now being threatened of consequences, he told reporters after attending a funeral of Stephen Mogusu, one of the fraternity members who died of COVID-19 on Dec. 7, in Kisii, southwestern Kenya. “No amount of threats will work, we will not undertake a suicide mission,” he said.

“A great loss not just to the family, medical profession & the community but the country at large,” he said in a separate tweet. “A budding career cut short due to #Covid_19 complications in service to the nation. You have paid the ultimate price, fare thee well. Yours shall not be in vain.”

This worsens the situation for Kenya, which is already facing an ailing health care system following a strike by nurses and clinical officers early December, which is still ongoing. They have similar grievances and have vowed not to return to duty until they are addressed.

Kenyans have lamented the lack of services in public hospitals, forcing those in desperate need to seek expensive care at private facilities.

Health Minister Mutahi Kagwe has cautioned the striking medics that they could lose their jobs if work is not resumed.

At least 14 doctors have died of the novel disease since the first case was confirmed in March, according to the doctors union.

The strike was due to start on Dec. 7 but got delayed for two weeks for talks with the government.

Doctors working in hospitals run by regional county governments have also been staging strikes intermittently since March over similar grievances.