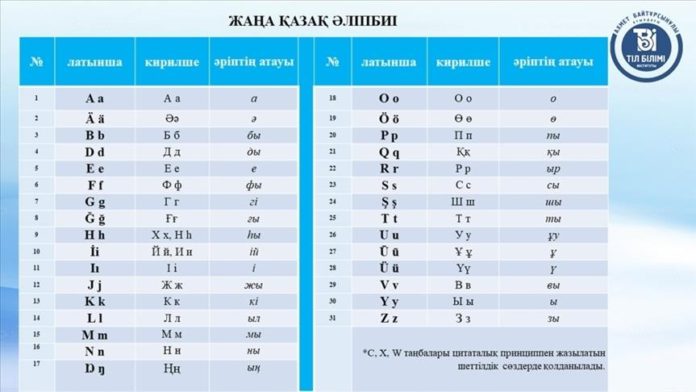 Communication between Turkic-speaking countries will add a new dimension to Kazakhstan’s transition from the Cyrillic alphabet to the Latin alphabet in 2023.

Despite gaining independence from the Soviet Union in 1991, Kazakhstan, which continued to use the Cyrillic alphabet like other former Soviet countries since 1940, decided to switch to the Latin alphabet in 2017 upon orders of then-President Nursultan Nazarbayev.

The National Alphabet Commission was established and efforts to transition to the new alphabet were initiated.

Since then, writing the names of state buildings, streets, shops and pharmacies has become widespread in the Kazakh language using the Latin alphabet.

But the new alphabet, in which the apostrophe was used extensively, has been then criticized by Kazakhs, and current President Kassym-Jomart Tokayev gave an order to redevelop the alphabet.

On the eve of the 30th anniversary of independence, the National Alphabet Commission introduced the improved national alphabet adapted for Latin letters.

The new alphabet, consisting of 31 letters, was presented after a Jan. 28 meeting that was chaired by Prime Minister Askar Mamin.

Murat Bahtiyaruli, who is a member of the Senate of Parliament and also a member of the Commission, told Anadolu Agency that nearly 3,000 experts have been working on the alphabet.

He said in the process of developing the new alphabet, the Commission took into account the experiences of Turkic-speaking countries.

“Studies were carried out with 18 linguistics experts from Turkey, Azerbaijan, Tatarstan, Uzbekistan and Kyrgyzstan,” he said.

He stressed that Kazakhstan has an important history regarding the transition to the alphabet.

“We used the old Arabic alphabet until 1929. Then we switched to the Latin alphabet. We have been reading and writing in Cyrillic letters since 1940. Fear is voiced that our cultural heritage might be lost. However, this is not possible with the 21st century technology,” he said.

“This move will be an important factor in the widespread use of Kazakh language among the next young population,” he said.

He also emphasized that as of 2023, all schools in Kazakhstan will switch to the 12-year education system.

“Children who will go to primary school during the period in question and will begin to receive an education with the new Kazakh alphabet, which has been adapted to Latin letters,” said Bahtiyaruli.

Karligash Kurmangalikizi, another member of the National Alphabet Commission, said the new alphabet is similar to the alphabets of Turkic-speaking countries and that this may be an important issue in increasing integration between relative states.