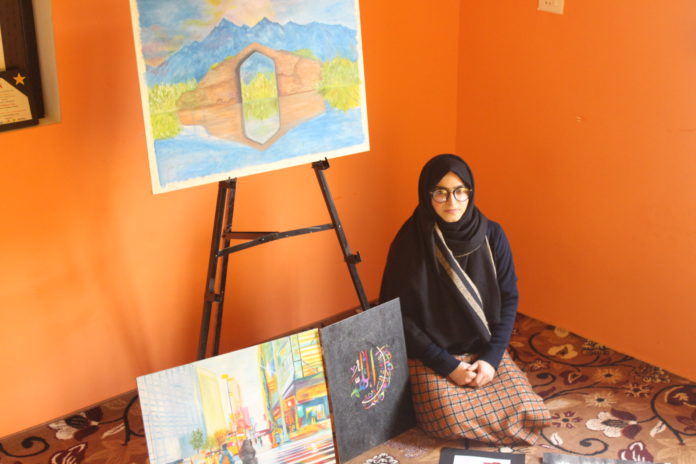 “You are not just a drop in the ocean, you are the ocean in a drop,” Badarunisa Bhat, a 25-year-old artist in Indian-administered Kashmir, quotes Mevlana Jalaluddin al-Rumi – a 13th-century Sufi mystic, poet, and Islamic scholar – as an inspiration for her artistic spiritual journey to find God.

In the Muslim-dominated capital city of Srinagar, the paintings at her home walls depict the mystic work that Bhat has stroked over the years since she got inclined towards this form of art.

At a very early age, she says she loved to paint, but it was her grandfather who taught her about the works of Rumi and Islamic literature.

“My inclination towards spiritual art has got shaped by the surroundings in which I grew up. When I was a teenager, I started reading about Islamic literature, particularly about Rumi, and that influenced me a lot as an artist,” Bhat told Anadolu Agency at her home.

She said the illuminating light of the moon in most of her paintings depicts the straight path, which a human yearns for or wants to go in order to realize himself.

Growing up in a decades-long conflict, women of Kashmir have battled many social abnormalities, but new age artists like Bhat want to change that through their art.

The woman and the moon in her paintings reflect how she can escape all the pain through spirituality.

“My paintings give some kind of relief from the grief, pain, and loneliness that the women are facing in this torn region through decades of conflict and social discrimination. It is just the divine force that can soothe our wounded heart,” she said.

Her art somewhat resembles that of great Kashmiri women poets such as Lal Ded, Habba Khatoon, Rupa Bhawani, and Arnimal – mystic, saints, and poets from the 14th to 18th century whose body of works mainly revolved around social discrimination and suffering, but finding escapism in being near to God.

Bhat believes that the sufferings affect every sensitive soul, with artists, poets, and others equally impacted and her works are the feelings which she paints on the canvas.

Afifa Makhdoomi, another female artist from the region, started painting in school, like Bhat.

“I started drawing in school and gradually became more passionate about it in the later years of my life, despite facing rejection from my family at one point,” she said.

Paints in black and white

Most of Makhdoomi’s works are in black and white, pulling the viewer’s immediate attention to the subject.

“I use monochromatic art form just to depict what the subject is going through, and I have chosen this art based on the events which we are witnessing over the years,” she said.

The paintings at her home tell many stories about the turmoil, depicting consequences of conflict like the effect of pellet guns and schools.

Over the years, the Kashmir region has witnessed long-term violence in which deaths and destruction have become a regular scene to watch, and it has not escaped the artists’ attention.

“As an artist, you cannot escape what is happening around, and this comes out naturally for the artist when they feel for it,” she said. 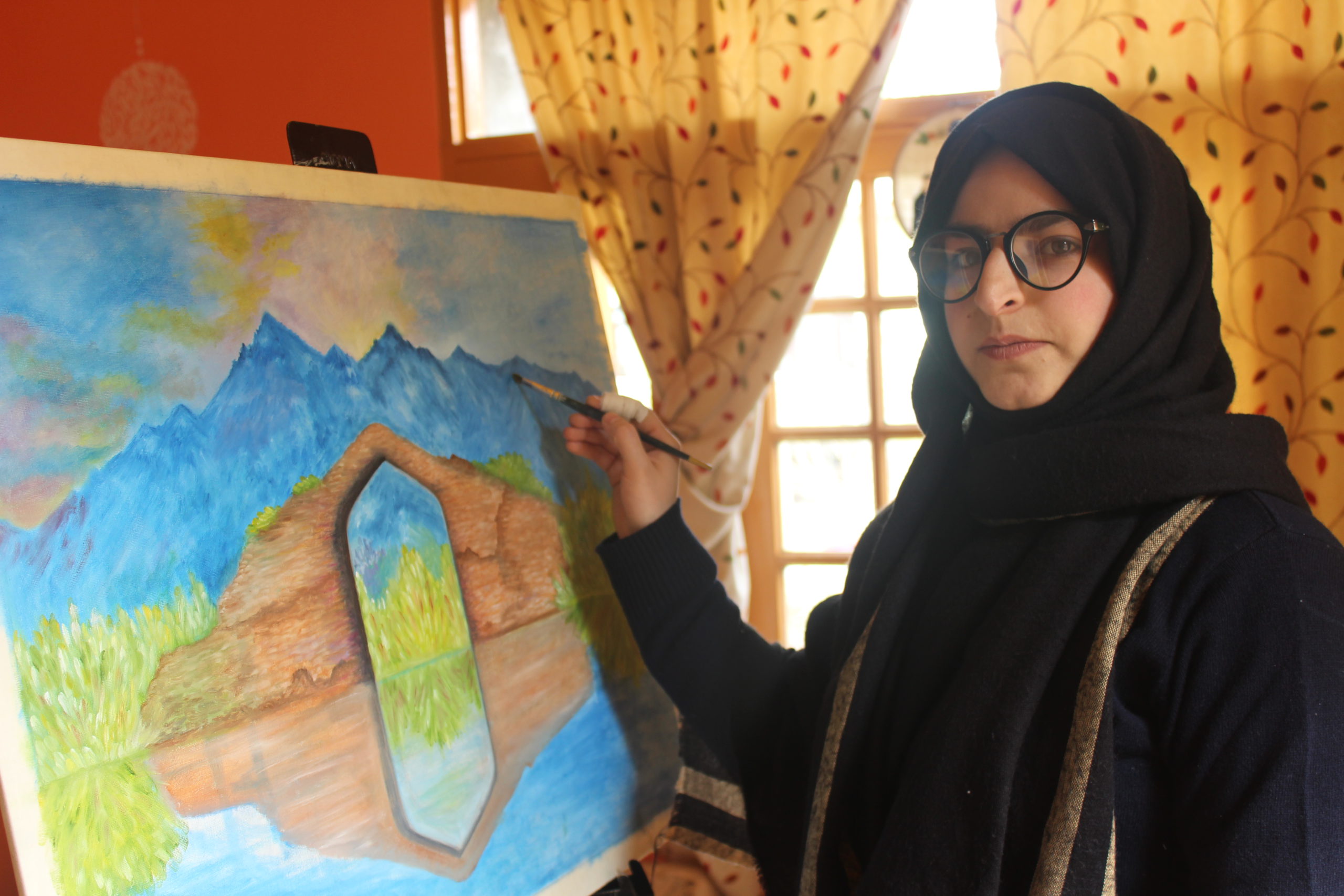 Her works revolve mostly around conflict, women’s issues, depression, and children, but they are risky too.

She said her artworks related to conflict have never been well received by people living outside her region.

“I used to get threats from many people on social media asking me why I paint such things.”

She pointed to a painting of an eyeball perforated by pellets.

It was during the 2010 unrest when the Indian government forces used pellet guns to control the demonstrations in the region, and since then thousands have been left blinded as a result of their usage.

Makhdoomi, who is pursuing a postgraduate degree in applied arts, said artists like her who want to showcase reality in the form of art face major risks.

She has somewhat shifted her focus now on women’s issues, which are deeply rooted in society.

“Women are still taken for granted, and their emotions and mental wellbeing are still being played with. I want to paint all these and I am doing it,” she said in an affirmative tone.

Both Bhat and Makhdoomi want to excel at what they do. They have already received recognition for their works through many awards.

Bhat said one of her paintings is on display at Ankara University in Turkey. Besides, she has sold her artworks in Australia and other countries.

Makhdoomi also organized different art exhibitions of her works in many countries, particularly in Europe.

“Through art, a message can cross any boundary, and if somehow my work portrays that message, I will consider myself to have succeeded in my art,” she said.