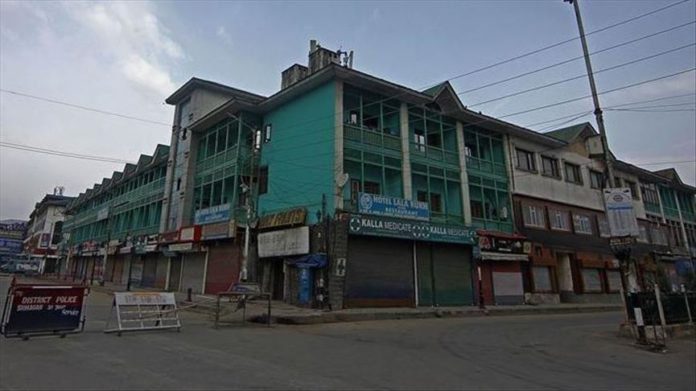 Observing May Day, the world on Friday commemorated the labor protests of 1886 at the Haymarket Square Chicago and expressed quiet solidarity with workers in the face of restrictions imposed by COVID-19 pandemic.

But not many people know that much before this incident, the world’s first organized labor and trade union movement had taken place in the streets in Srinagar — the summer capital of Indian-administered Kashmir.

Almost 21-years before the Haymarket incident, weavers and workers associated with shawl weaving took to the streets of Srinagar on April 29, 1865, protesting against high taxes. At least 28 workers lost their lives and hundreds were injured.

For over centuries, Kashmiri shawls – soft rug loosely worn over shoulders – has mesmerized the world receiving accolades from even Napoleon Bonaparte, whose wife Josephine, ever extravagant, is said to have owned as many as 60 Kashmiri shawls that they had taken from Turkish treasury in Egypt.

Not only was the Kashmiri Pashmina shawl a high fashion in Europe and elsewhere, but its high cost had also made it a status symbol.

Speaking to Anadolu Agency, Saleem Beg, former director-general of Kashmir Tourism and an expert on heritage said the history of shawl weaving in the region dates back to ancient times.

Quoting Iranian historian Zain-ul-Abideen Rahinuma, he said that out of many things which Hazrat Khadija brought along with her when she married to Prophet Muhammad (SAW) in the year 595 was also a Kashmiri shawl. Rahinuma has written an elaborate profile of Hazrat Khadija and has listed items she carried as trousseau.

Despite the popularity of this loom, historians have recorded that back in Kashmir, the condition of those associated with the production of shawls was pathetic.

According to Mirdu Rai, author of Hindu Rulers, Muslim Subjects: Islam, Rights, and the History of Kashmir, the system of taxation imposed by Hindu Dogra rulers in the region was such that only the barest margin of subsistence was allowed to the Muslim Kashmiri workers.

“The production of silk, saffron, paper, tobacco, wine, and salt were state monopoly. A duty of 85% was levied on all woolen manufacture. Under these pitiable working conditions, the shawl weaver could, thus, hardly earn seven rupees ($0.092) per month. Out of this earning, the workers had to pay five rupees ($0.066) as tax, as recorded by British army officer Lord Birdwood.

According to the military officer, with the amount left with workers, that also included the cost of wool, etc., they could not afford to buy cereals or vegetables and would eat only water chestnuts to keep a connection with the soul.

“The shawl weavers were allowed neither to leave Kashmir nor change their employment so that they were nearly in the position of slaves. Because there was fear with the Hindu ruler that migration of the weavers will reduce his revenue,” writes a European traveler Andrew Wilson, in his book The Abode of Snow: Observations on a Journey from Chinese Tibet to the Indian Caucasus through the Upper Valleys of the Himalaya. He had visited the region in 1873.

The special taxation department called Daag-e-shawl was known for arbitrarily collecting exorbitant taxes for the ruler and regulate the work of weavers with factory owners or proprietors.

“In case, a weaver left the work, the Daag-e-shawl would arrest his wife, children, and parents and impound his house,” records the book.

Further, a new practice started that the ruler would auction this department to a contractor, who would, in turn, collect taxes. In 1865, the ruler had contracted this department to a wealthy Kashmiri Hindu Raj Kak Dhar in return of 2 million rupees ($26,402). “This left Dhar entirely free to realize this amount through arbitrarily fixed tax rates and employing soldiers to fleece workers,” says historian Mohammad Yusuf Saraf.

Nearly 125,000 people in Kashmir were associated with this trade in 1865, which included weavers, washermen, and other skilled laborers. According to revenue records, this industry would annually generate 5 million rupees ($6,594) – a handsome amount in the 19th century.

With their patience coming to the brim, the weavers took out a procession against high taxation, miserable working conditions and demanded nominal wages on April 29, 1865. They were also demanding an end to the ban on their migration or moving to another profession. They were also asking for a meeting with Diwan, representative of the ruler in Srinagar.

But a column of Dogra Army under Col. Bije Singh stopped them at the narrow Haji Pather Bridge over River Jhelum. Historians have recorded that in the stampede 28 improvised unarmed weavers were thrown in the river and scores were injured in bullet shots.

“Next day the dead bodies were recovered from the stream and were paraded by the weavers to drive attention of ruler. The organizers of the procession were stopped and arrested and even flogged,” says Rehka Chowdary, a teacher at the University of Jammu.

Rasool Sheikh, Ali Pal, Abdul Qudus, and Sona Shah — the leaders, who had led the procession –were imprisoned in Bahu Fort prison in Jammu region.

They never returned to Kashmir and died in jails. Neither any inquiry was instituted nor any memorial was ever dedicated to the first trade union movement of the world, which happened much before the Chicago incident or even before the Russian or Chinese communist revolutions, which were touted as the result of worker’s resistance to exploitation.

It is ironic that this movement has not even received any recognition from the trade unions or global labor movements.