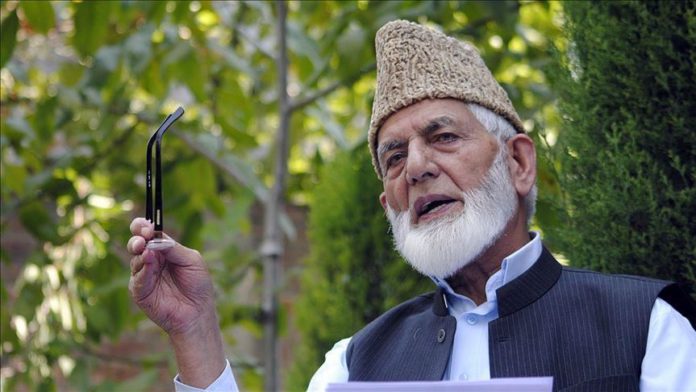 Kashmiri leader Syed Ali Geelani on Monday stepped down from the leadership of All Parties Hurriyat Conference, a conglomerate of several pro-freedom parties in the disputed region.

The ailing 90-year-old leader, who has been under house arrest for the better part of the past decade, said in a purported audio clip: “I completely distance myself from the leadership of Hurriyat Conference in view of its present situation. All constituents of the forum have been informed about my decision through a detailed letter.”

The primary reason behind his decision, as cited in the letter, appears to be a few decisions taken by the Pakistan-administered Kashmir-based chapter of Hurriyat Conference.

The letter says the chapter only represented Hurriyat in Pakistan and was not authorized to take decisions on its own. It said there were complaints of financial irregularities, self-promotion and infighting against some Pakistan-based members.

But before an inquiry into these complaints could be completed, the letter said, some members dissolved the chapter itself and elected an ad hoc body. It accuses the members of starting a smear campaign against the chapter’s convenor, Abdullah Geelani, who had been appointed last year after India abrogated special laws which granted Indian-administered Kashmir autonomy.

In the run up to the abrogation of the laws, hundreds of pro-freedom leaders and activists were arrested and flown out of Kashmir to jails in several Indian cities. A few leaders, however, were put under house arrest in Kashmir or were not detained at all.

Addressing such leaders, Syed Ali Geelani says in the letter: “After Aug. 5, the leaders who were not arrested were expected to lead the people, give them hope. Despite my house detention and government’s curbs, I searched hard for you but you were not available. I couldn’t do much because of my health and detention.”

While criticizing the members for being unavailable at the crucial juncture in Kashmir struggle’s history, Geelani said: “But you had time to organize meetings and publicize decisions through favorite media channels.”

Syed Ali Geelani has been a member of the Hurriyat when it was formed in 1993 as a political arm of the anti-India insurgency. He was elected its chairman for life in 2003. Hurriyat Conference (Geelani) has more than 24 constituent parties, some of which have only a handful of members, as its constituents.

Another faction of Hurriyat Conference is led by Mirwaiz Umar Farooq, who has been under house detention since Aug. 5 last year.

Both Hurriyats regularly used to issue statements and protest programs. But after the clampdown last year, the activities of both came to a standstill.

Meanwhile, Abdullah Geelani confirmed that Syed Ali Geelani had parted ways with the Hurriyat Conference, but refused to speak about the reasons or provide further details.

* Islamuddin Sajid contributed to this story from Islamabad