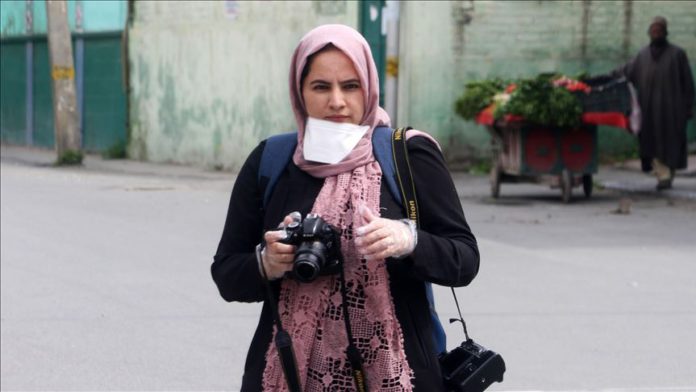 Freelance photojournalist from the Indian-administered Kashmir Masrat Zahra was awarded the 2020 Peter Mackler Award for Courageous and Ethical Journalism.

She was named winner for the award for her work covering events in Kashmir with a specific focus on women in the region.

In her note, Catherine Antoine, president of the Global Media Forum Training Group and founder of the Peter Mackler Award, said: “Masrat Zahra exhibits the very qualities that my late husband, Peter Mackler, fostered in the new generation of reporters whose path he crossed.”

“Masrat’s complete dedication to reporting the story, no matter the risks, along with her mental fearlessness and creative approach to use any medium at her disposal to bear witness to the world made our choice easy,” she added.

In a zoom interview with the Peter Mackler Award, Masrat Zahra from her home in Srinagar city said: “It’s our job to work and show the truth and you have to take risks to do it.”

She also said that she is privileged to tell the stories that have been ignored of Kashmiri women caught up in a conflict zone.

Applauding Zahra’s work, the award citation noted that over the course of her work, Zahra was “summoned by the police and accused of spreading fake news and giving support to enemies of the state.”

In late April, Zahra was charged under Unlawful Activities Act (UAPA) for her work which she had uploaded on social media. Under this stringent law, a suspect can be jailed for up to seven years.

Zahra will be honored with the award in a virtual ceremony in New York City on Sept. 24, 2020.