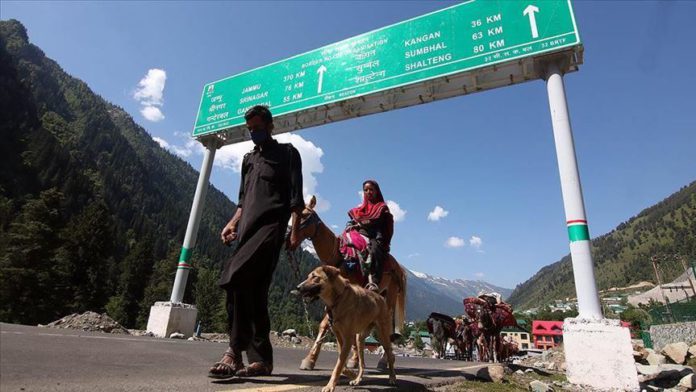 The National Conference, the regional party of Indian-administered Jammu and Kashmir, demanded Friday restoration of statehood and special status of the region.

In its first statement since Aug. 5, 2019, the oldest regional party demanded revocation of decisions by India while seeking an unconditional dialogue with all stakeholders for lasting peace and prosperity in the region.

It welcomed an apparent shift in the ruling BJP party’s stand from “belligerence to amity and peace” and demanded an immediate annulment of all decisions taken by the Indian government last year and restoration of the constitutional position of Jammu and Kashmir prior to Aug. 5, 2019.

In a joint statement issued by party president and former Chief Minister of the region Farooq Abdullah, other parliamentarians and senior party leaders, it said the change in BJP’s stand was discernible from recent statements of ministers Rajnath Singh and Nitin Gadkari.

The statement welcomed the bold admission made by Gadkari mentioning his statement that India’s strength does not come from expansion, it wants “peace not violence” and to work together.

But mere statements to create an atmosphere of “peace, love and amity” are of no meaning unless India respects the political aspirations of the people of Jammu and Kashmir, the statement said.

Signatories to the statement also expressed deep anguish about skirmishes along the borders and the loss of life and property.

“The civilian population in the border areas, it is pointed out, is under huge economic stress and the border skirmishes are to further compound its problems,” it said.

Meantime, party spokesman Imran Nabi Dar told Anadolu Agency the party cleared its stand on the matter and is looking forward to pushing it further.

Asked why it took so long to produce such a statement, Dar said leadership initially made it clear that when all political leaders and workers are released then it can clearly talk about the important matter.

“Most of the top leadership has been released and so is the statement today and hopefully we are looking to push it further,” Dar said.

Dialogue between Russia and US, NATO to be key in easing...