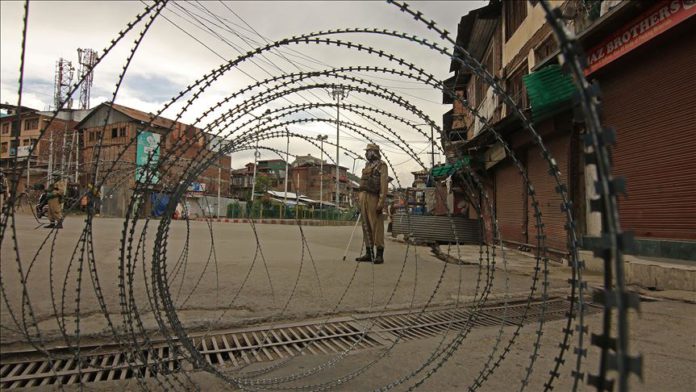 The day to commemorate the people killed in a revolt against the Hindu king in 1931, had been declared a national day soon after the birth of India and Pakistan in 1947 and was observed by all sections cutting across political and ideological affiliations.

The function was held every year officially in the downtown locality of Srinagar in the premises of the martyr’s graveyard, with a guard of honor, and the chief minister and other political leaders laying wreath on graves.

But after Aug. 5 decision last year, when India revoked the special status of the region, it also removed July 13 from among the days of remembrance.

To counter this measure and to continue marking it a national day, Pakistan-administered Kashmir administration on Thursday announced to observe the day with similar enthusiasm in Muzaffarabad.

According to an official statement by Pakistan-administered Kashmir, also known as Azad Jammu and Kashmir (AJK) government, the “martyrs day”, observed every year by the Kashmiris across the world, will also be observed this year by AJK, despite health emergency due to COVID-19 pandemic.

“The main event will be held at Prime Minister’s secretariat at Muzaffarabad, the capital city of the state [AJK], where Prime Minister Raja Farooq Haider will be the chief guest,” the statement said.

All officials, political and religious leaders, as well as members of the civil society will participate in the main event, while following social distancing rules and wearing masks as part of pandemic measures.

All Parties Hurriyat Conference (APHC) AJK chapter will also mark the day in Islamabad and other parts of Azad Kashmir to hold walk, gatherings, and protests.

“We will hold a protest rally in front of Indian high commission Islamabad against the ongoing human rights violations and killing of innocent Kashmiris in the Indian-occupied Kashmir,” Abdul Hamid Loon, a leader of APHC told Anadolu Agency.

A day earlier, on July 8, Kashmiris also observed a strike, as shops and businesses remained closed in the Indian-administered Jammu and Kashmir to honor iconic militant commander Burhan Wani, who was killed on July 8, 2016, in clashes with the Indian forces.

On Monday, Abdullah Geelani, the ailing and incarcerated pro-freedom leader Syed Ali Geelani’s representative in Pakistan-administered Kashmir, also issued a statement of elder Geelani and asked people to observe the strike on Burhan’s death anniversary, as well as on July 13.

Burhan’s killing had sparked months of anti-India protests and clashes, during which more than 120 protesters were shot dead and thousands were injured and arrested. More than 1,000 people were blinded in one or both eyes by metal pellets fired by the Indian forces into protesting crowds. Burhan’s funeral was believed to have been the biggest in recent history, with estimates ranging between 100,000 and 200,000 participants, paying their respects.

Some Kashmiri groups in Jammu and Kashmir have been fighting for independence against the Indian rule, or for unification with neighboring Pakistan.

China greatest threat to future prosperity of US: FBI