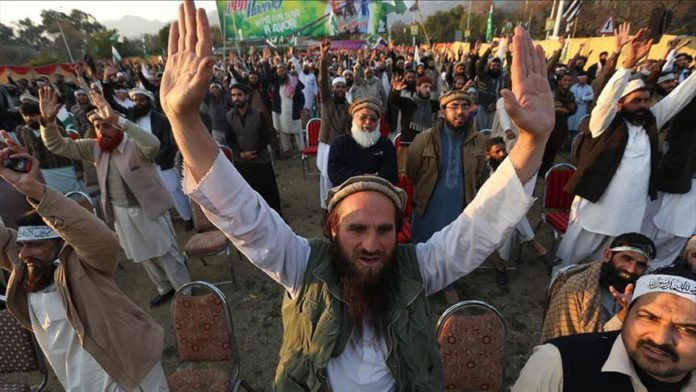 Protests were held in several parts of the Indian-administered Kashmir on Monday after a video in which a Hindu man is heard making derogatory remarks against the Prophet Muhammad went viral social media.

Protests were held in Lolab area of Kashmir Valley and in Reasi, Thathri, Doda and Baderwah areas of Jammu region, eyewitnesses in the areas told Anadolu Agency.

The government has imposed a curfew in Kishtwar area of Jammu, which has witnessed religious riots in the past.

Mufti Nasir, the grand mufti in the region, has asked people to hold peaceful demonstrations on Friday after Zuhr prayers against the blasphemous remarks.

“No Muslim would tolerate abuses against the prophet. The culprits should be detained under preventive law and should be handed a strict punishment. Their words have the potential to disturb peace,” Nasir told the media.

On Sunday evening, police said the accused, identified as Satpal and Deepak, have been arrested.

Mukesh Singh, the police chief in the region, said in a video statement that search was on for a third person that could be seen in the controversial video.

“I appeal to the people to desist from circulating the video as it will harm communal amity. The police will never tolerate these persons who create tensions between communities. Police will act harshly against such people,” Singh said.

He also warned of “stringent action” against those who circulate or share the video to “spread communal disharmony”.

Firdous Tak, a former lawmaker from Jammu, said the first information report registered by the police against the accused has a legal flaw.

In a Twitter post, Tak said the district magistrate concerned should have filed the complaint against the accused, adding in absence of such a complaint, it is easier for the accused to walk free.

On Aug. 5, 2019, the Indian government revoked Article 370 and other related provisions from its Constitution, scrapping the country’s only Muslim-majority state of its autonomy. It was also split into two federally administered territories.

Simultaneously, it locked the region down, detaining thousands of people, imposing restrictions on movement and enforcing a communications blackout.