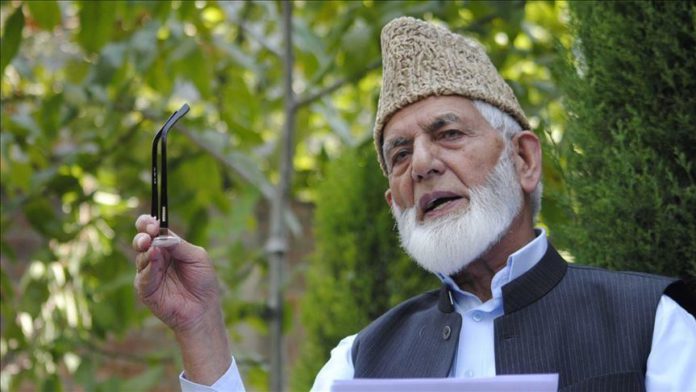 In a statement released by his representative on Monday, Geelani said the day should be observed as an “awareness day,” and Kashmiri diaspora should protest outside Indian embassies.

“…Kashmiris will never relinquish their rightful struggle for their rights,” read the statement.

On Aug. 5 last year, the Indian government revoked Article 370 and other related provisions from its Constitution, scrapping the country’s only Muslim-majority state with its autonomy. Jammu and Kashmir was also split into two federally administered territories.

Pro-freedom leadership in Kashmir has been in disarray since last April when hundreds of leaders and activists were detained and jailed in India.

Geelani is also under house arrest for many years, and is not allowed to speak to the media. His representative based in Pakistan-administered Kashmir, Abdullah Geelani, releases statements on his behalf.

The statement said “the fascist Indian government” lifted the veil and forcibly merged Kashmir with its union, and “measures to convert Muslims into a minority are in full swing.”

He urged to spread Kashmir’s history among the younger generation.

Last month, the 90-year-old ailing leader stepped down from the leadership of Hurriyat Conference, more than two dozen pro-freedom parties, citing internal discord among other reasons.