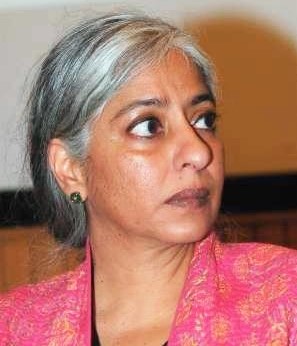 She said there was a great deal of fear in the Kashmir Valley.

In an exclusive interview with Anadolu Agency, she said the Indian government’s arguments that revocation of special status will accelerate development and end militancy have not come true.

“There is hardly any development on the ground and militancy continues to remain there. Figures for militancy have come down a bit, but might go up again,” said Radha Kumar, who is also former director-general of Delhi Policy Group and a specialist on issues of peace and security.

Anadolu Agency: What is your assessment about the ground situation in Kashmir as it completes one year since India annexed the region and revoked its special status?

There are small improvements compared to August last year – for example, telephone services are restored and some movement is possible, newspapers are now functioning and so on. But these are very small changes.

Q: When the government scrapped the special status of Jammu and Kashmir last year, it said it will end of terrorism and accelerate development. What did you find while preparing the report?

RK: There is hardly any development on the ground and militancy continues to remain there. Figures for militancy have come down a bit but might go up again. Pakistani attempts at infiltrating cross border militants have grown sharply. It is not possible to end militancy fully until Pakistan cooperates by choosing peaceful negotiations and ending support for cross-border militancy. As our report shows, development is almost at a standstill; indeed, the losses suffered by industry in Jammu and Kashmir are huge.

Q: At present, politics has come to a standstill in the region, even traditional pro-India politicians have chosen to stay inactive. Do you see any scope of the revival of political initiatives as a vacuum exists at present?

RK: Please remember the unit is Jammu and Kashmir. The politics in Jammu is mostly pro-India as you describe it. Conflict and pro-independence groups are mostly in the Kashmir Valley.

Regarding the political vacuum, the first steps are to restore 4G services, release all political leaders still in detention, and allow peaceful dissent, then restore statehood and hold elections, following which a dialogue can start between New Delhi and elected representatives as well as separatist leaders on finding a resolution to the outstanding issue.

Q: When you spoke to people on the ground, what were the common concerns?

RK: All the people we spoke to, feel profoundly humiliated by the decisions made by the Indian government. There is a great deal of fear in the Kashmir Valley.

Q: Over the last few months’ tension has soared along the Line of Actual Control (LAC) in the Ladakh region between India and China. Is there any connection between India’s decision to end the special status of the region and China’s pro-activeness?

RK: The link is purely opportunist. With the same opportunism, China has seized this moment when the international community is focused on the pandemic, to initiate aggressive actions across East Asia and parts of South Asia externally, and internally too. What they are doing in Hong Kong is the latest example, but what they have been doing with Uighurs in Xinjiang is terrifying.

Q: Indian government is on a spree of issuing orders concerning Kashmir whether it is domicile law or auctioning of material. How do you see it?

RK: We have been deeply critical of all these steps in our report. Demographic change of the very large kind that is being feared generally takes hundreds of years, unless there are a series of pogroms. That has not happened yet, thankfully.

Q: The Indian government has announced domicile law for JK but not for Ladakh. What could be the reason behind it?

RK: Many in Ladakh are frightened that they do not have even the small protection that the new domicile rules provide for Jammu and Kashmir, even though this protection is much weaker than the earlier state subject law, which was scrapped.

Q: Lastly, you were part of a group of Interlocutors for Jammu and Kashmir. What was your experience?

RK: Our experience was harrowing, having to cope with the deep anger and grief that we encountered. As mediators, we had several other hurdles too – the BJP, then in opposition, lost no opportunity to criticize us and pressure the former Prime Minister Manmohan Singh administration. There were no counterparts in the Pakistani side to talk to us. We had to engage with several administrative and policy departments, and so on. Some reforms were undertaken based on our recommendations – for example, amnesty for stone-throwers release of some political prisoners, improvements in process of issuing passports, removal of check posts and bunkers in crowded urban areas, increased development and employment aid, and so on.

But there was no action on the big political recommendations, partly, I believe, because they required three tracks – between New Delhi and elected representatives, and separatist leaders, and between India and Pakistan. As far as Pakistan was concerned, the timing was bad. After President Pervez Musharraf put the India-Pakistan peace talks on a back burner in 2006-7, the newly elected Asif Zardari administration was more preoccupied with internal challenges. So, the efforts to restart peace talks came to halt. Following them, the Nawaz Sharif administration had no authority, and the Imran Khan administration is similarly internally preoccupied, as is the Modi government in India.