TurkishPress
Home News Kashmir under curfew ahead of Aug 5 anniversary 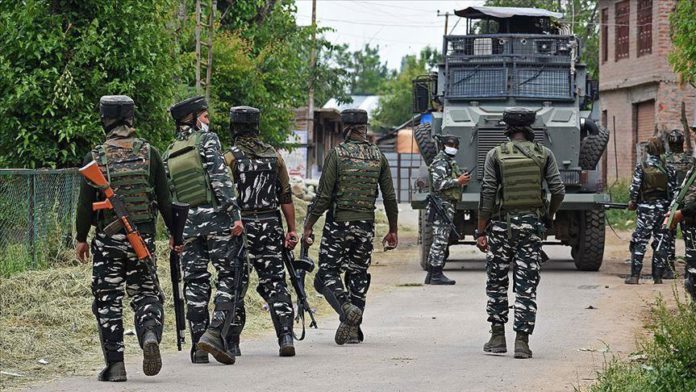 The regional administration in the Indian-administered Kashmir on Tuesday imposed a two-day curfew ahead of the first anniversary of the revocation of region’s limited autonomy.

The district magistrate of the main city Srinagar ordered a curfew to be imposed Aug. 4-5 across the whole region in view of apprehensions of “law and order problems”.

But the order added that restrictions shall continue to remain in effect until Aug. 8 unless revised earlier.

“A series of inputs have been received suggesting that separatist and Pakistan-sponsored groups are planning to observe Aug. 5 as Black Day and violent action or protests are not ruled out,” Shahid Choudhary, the district magistrate of Srinagar, said in the released order.

“There are specific inputs about violent protests endangering public life and property,” the order noted, adding that it is imminent to impose a curfew to prevent such violence and loss of life or property.

Choudhary also said any mass gathering would also be detrimental to efforts related to the containment of COVID-19.

Since Monday night, additional police and paramilitary personnel were deployed in strength across the region.

“People are requested not to violate the law and stay indoors,” said the police official, who spoke on the condition of anonymity.

Barricades have been set up at hundreds of places in the Kashmir region, including the Srinagar city, to regulate movement of essential services and emergencies while concertina wires have been also been laid.

On Aug. 5, 2019, the Indian government revoked Article 370 and other related provisions from its Constitution, scrapping the autonomy of the country’s only Muslim-majority state. It was also split into two federally administered territories.

Meanwhile, in another order on Monday, the authorities announced strict restrictions, saying curbs have been enforced to contain the virus’s spread.

The move came two days ahead of the first anniversary of Aug. 5 decision of the Indian government which revoked the region’s limited autonomy last year.

“No movement of people, except for essential services and medical emergencies, is allowed in view of spikes in COVID-19 infections and fatalities,” the administration said in a statement.

The death toll in the region from the virus crossed the 410 mark Monday while more than 22,200 people have been infected so far.

The authorities sealed off most roads, and market places were closed, while security forces have been deployed at several locations across the region to enforce the lockdown, the officials said, adding any violations would be met with a strong response.

While officials maintained that the restrictions were implemented in view of the COVID-19 situation, Iltija Mufti, the daughter of People’s Democratic Party chair Mehbooba Mufti, said the heightened security arrangements in the region aimed at ensuring that “anger and frustration felt by people” against the Indian government’s Aug. 5 decision “remain hidden”.

“Suddenly, there is heightened security & surveillance in Kashmir. Not like non-discriminatory COVID virus will be more active in the days approaching 5th August, so clearly this is being done to ensure that anger & frustration felt by people here remain hidden,” Iltija posted on her mother’s Twitter handle, which she has been using since her mother was taken into custody in August last year.