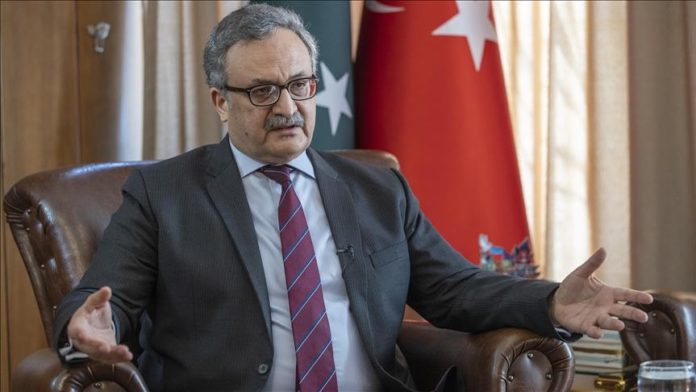 The embassy of Pakistan organized an event to commemorate Kashmir Solidarity Day in Ankara on Saturday.

“Kashmiris will prevail in the fight for their legitimate rights and see the dawn of freedom one day,” Pakistan’s ambassador to Turkiye Syrus Sajjad Qazi said.

“Pakistanis will stand with them until they get their right of self-determination. We know that India has not succeeded for 75 years. It may try this for the next 75 years, but it will not succeed.”

Kashmiris and Pakistanis around the world observe Kashmir Solidarity Day on Feb. 5 every year to extend moral support to people in Indian-administered Jammu and Kashmir.

The Pakistani envoy said Kashmir Solidarity Day serves as a “stark reminder of the broken promises and unfulfilled commitments made to the Kashmiri people by India for holding a plebiscite when it took the matter for the first time to the UN in January 1948.”

“If only the UN Security Council resolutions had been implemented, we would all have been spared this tragedy,” he added.

On Jan. 5, 1949, following a full-scale war between Pakistan and India in 1948, the UN Security Council pledged that an UN-supervised plebiscite would be held to resolve the Jammu and Kashmir dispute, but the exercise was never carried out.

In their messages read out at the embassy’s event, Pakistan’s President Arif Alvi and Prime Minister Imran Khan urged the international community to “take practical steps to hold India accountable for its “gross human rights violations” in Kashmir and fulfill the promises made through the UN to the Kashmiri people.

Alvi and Khan reiterated that Pakistan would give full political, moral and diplomatic support to the people of Kashmir until the issue is resolved in accordance with UNSC resolutions.

The event also included an exhibition of pictures meant to show the treatment of Kashmiris by Indian forces, including a photo of the infamous April 2017 incident when a Kashmiri man was tied to an Indian army vehicle as a human shield.

Indian and Pakistani troops have also fought intermittently in the northern Siachen region since 1984. A cease-fire took effect in 2003.