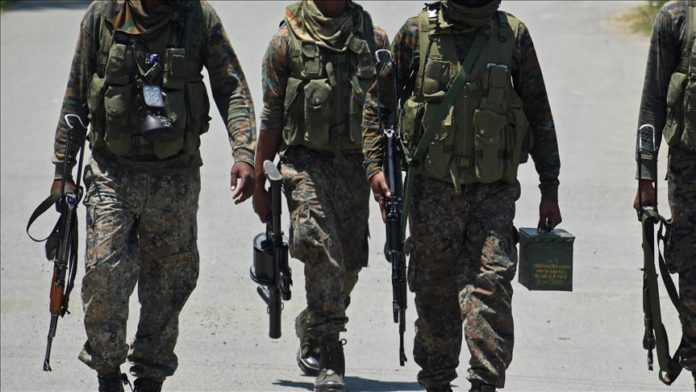 Indian-administered Kashmir has seen at least 229 killings during more than 100 military operations since January, a rights group said Wednesday.

The Jammu and Kashmir Coalition of Civil Society (JKCCS), which operates in the region, said in its bi-annual report that from Jan. 1 to June 30, the region witnessed the extrajudicial executions of at least 32 civilians and the killing of 54 armed forces personnel.

It also saw 55 internet shutdowns and the destruction of 48 structures, it said.

The report said three children and two women were also killed, while as “at least 107 Cordon and Search Operations (CASOs) and Cordon and Destroy Operations (CADOs) were conducted in the region, which resulted in the killing of 143 militants.”

“At least 57 gunfights took place between government forces and the militants following the search operations,” it said.

In addition, during search operations and encounters, “vandalism and destruction of civilian properties were reported.”

The report said that in the first six months of 2020, the media continued to be at the receiving end of pressure, intimidation and harassment by the authorities, with several incidents involving the beating of journalists.

“Besides physical assaults, a few Kashmir-based journalists were also booked under stringent charges and cases were filed against them,” it said.

The report noted that the Jammu and Kashmir police filed cases against two Kashmiri journalists under the Unlawful Activities Act, which clearly infringes on the right to
freedom of expression and freedom of the press as “such tactics signal a
forewarning for media personnel to adhere to the state narrative.”

It also said that high-speed mobile internet services have remained banned since Aug. 5 last year, noting that in the last six months, there were 55 instances of internet blockades.

The report said India is paving the way for demographic change in Indian-administered Kashmir on a large scale, thus institutionalizing a system of domination over indigenous populations.

“The order is a clear violation of the 4th Geneva Convention,” it noted.

The report cited observers as warning that the new domicile law could
permanently alter the demography of the disputed region.

It also touched on the recently introduced new media policy wherein the government will examine the content of the media.

According to the policy, the government will decide what is “fake,” “unethical” or “anti-national” news and take legal action against the journalist or media organization concerned, including sharing information with security agencies.

The JKCCS’s report said that after the first case of the novel coronavirus was declared in the region in March, the local government clamped down with restrictions and curfews when people in the region had already been locked up since August last year.

It said roads were barricaded while surveillance tools were used to track down people.

“Until April 16, around 2,303 people were also arrested in the region for defying lockdown orders while many shops were sealed and vehicles seized in the region,” it said.

The report also said that 345 prisoners were released amid the pandemic, but many prisoners are still being held in Indian jails while giving reference to J&K High Court Bar Association President Mian Abdul Qayoom, who has been detained since Aug. 5 last year.

It said during the COVID-19 crisis, many doctors in the region have been harassed and beaten by government forces while performing their duties.

Anadolu Agency attempted to contact government advisor Farooq Khan on the issues covered in the report but received no response despite repeated calls.

It also contacted government spokesman Rohit Kansal, who is yet to respond to a texted query.