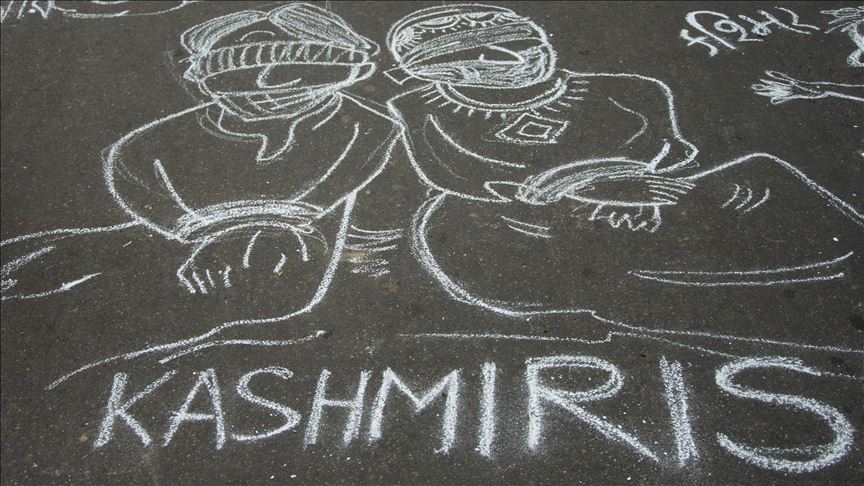 A promising child back in 2009, Yawar Ahmed Bhat, 23, is now fighting a lonely battle against his mental disability in Indian-administered Jammu and Kashmir.

His life came to a standstill in 2009 at the age of 12, when a tear smoke shell hit his head. The police was trying to disrupt a protest which had had erupted against the rape and murder of two women, Asiya and Neelofar.

On eve of the World Children Day being observed on Friday, rights groups believe that many children like Yawar have been facing the worst conditions in the region since the outbreak of the civil uprising in 2008.

Yawar’s relatives say, he is 75% disabled and continues to live in trauma even after 11 years.

“He has lost his mother, school, friends and remains mostly stuck at one place with a feeble memory. He is not normal now. This is what the state has done to my son,” his father Mohammad Ibrahim Bhat told Anadolu Agency.

Although authorities admitted that the boy was not part of the protest, the compensation claim is stuck in the corridors of power over the past 11 years.

“I sold whatever I had, even my small shop and gold ornaments of my two daughters to treat my son. But their institutional injustice that I have to ask for compensation despite the government admitting its responsibility for my child’s condition,” Bhat said.

He recalled that his son had gone out to buy eatables from the nearby shop. “Initially we had no idea that he had been hit by a shell, “said the father, adding that his son had been already taken to hospital when they reached the scene.

“He was very critical as some part of his brain had got damaged. Doctors told me that he needs surgery, but that is risky as well,” Bhat added.

Looking at the condition of his son, Bhat gave consent for surgery. But when it was completed, Yawar spent 11 months in a coma, at the hospital’s intensive care unit and then at home.

While Yawar was lying on the bed in an unconscious state, his mother Gulshan Jan died of a massive heart attack.

“She was looking at him and crying. She could not bear the pain, died in 2014,” said Bhat.

He said his son is 75% mentally disabled and he has become aggressive as well.

Although police have admitted that Yawar was not involved in any subversive activity but nobody was held accountable for his deplorable condition.

In an official letter senior district police officer said that on June 30, 2009, while dispersing the mob, the tear smoke shell fired by the police struck the shutter of the shop at Aahli Masjid Gali Maisuma area which rebounded and hit one boy namely Yawar Ahmad Bhat on his head who was passing in the same street at the very moment.

“The medical opinion reveals that the nature of the injury was grievous and the said boy is not involved in any kind of subversive activity. The investigation of the case has been closed as untraced,” “said the letter, addressing to the district magistrate.

Children at the receiving end

A 2019 report titled Torture: Indian State’s instrument of Control in Indian administered Jammu and Kashmir by a civil society group stated that children and young male adolescents have been exposed to deep physical and mental injuries in the conflict.

Another report by an NGO Action Aid said when children are expected to enjoy a stress-free life, they are seen playing with guns enacting dead bodies, discussing blood and revenge in the region.

Speaking to Anadolu Agency, Dr. Yasir Rather, a psychiatrist in the region the uncertainties in Kashmir have deeply affected children directly or indirectly.

“To let a child, grow normally, there is a need for a better environment and unfortunately the political turmoil over the years has cost the psyche of children,” he said.

Since Aug. 5, 2019, when India revoked the special status of the region and later due to the COVID-19 outbreak, children have not gone to school. Due to restrictions on the internet, online education has also remained a low-key affair.