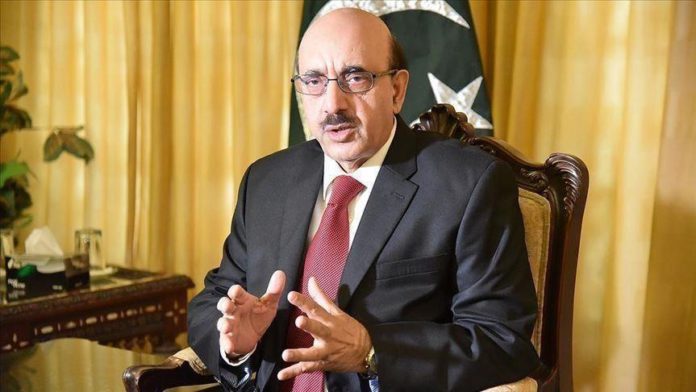 The president of Pakistani-administered Kashmir, also known as Azad Kashmir, Thursday appealed to the UN to act and save Kashmiris from annihilation.

In his message on Kashmir Solidarity Day, President Masood Khan said the international community should act and stop massacre, crime against humanity, and illicit transfer of Hindus in the occupied territory.

“We appeal to the international community, especially the United Nations, to act now to save Kashmiris from the scourge of annihilation. Stop sitting on the fence. Stop appeasing India. When the evil deed is done, wringing hands in contrition would be too little, too late,” Khan said.

Pakistan and Kashmiris across the world will observe Feb. 5 as Kashmir Solidarity Day on Friday.

Jamaat-e-Islami, Pakistan’s main religious-political party, began observing Kashmir Day in 1990, and since then Pakistan and Kashmiris around the world have been observing Feb. 5 as the Solidarity Day with the pro-independence movement in Jammu and Kashmir by staging rallies and organizing seminars and conferences.

“On this day, we express our resolute support for the people of the Indian-Occupied Jammu and Kashmir who have been in political and military bondage for the past 73 years,” the Azad Kashmir president said, adding they condemn the illegal actions India has taken since Aug. 5, 2019, to annex the occupied territory, to divide it, and to brutalize its people.

On Aug. 5, 2019, New Delhi scrapped the region’s autonomy and divided it into two federal territories.

“Rage, sorrow and distress will not stop the murderous frenzy of the BJP [Bharatiya Janata Party]-RSS [Rashtriya Swayamsevak Sangh] regime, which, in pursuit of its hatred-driven doctrine Hindutva, is stealing Kashmiris’ homeland and ripping off their state,” Khan said.

Both Pakistan and India control the Muslim-majority region in parts but claim in full. They have fought two full-scale wars over the territory.