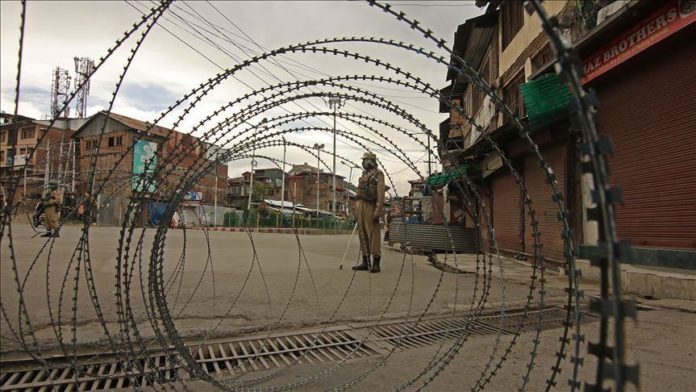 The police chief of the Indian-administered Kashmir claimed the security situation in the region has improved in the last year and there have been no major law and order situations, however, a rights group’s data shows the different picture.

He said fresh recruitment to militants ranks has also decreased.

“No civilian killing occurred at encounter sites or while handling law and order situations are the most significant achievements in the last one year,” Kumar told Anadolu Agency.

But the police claim is being disputed by the human rights activists in the region.

“Figures compiled by us reveal that violence has continued on the ground,” said Parvaiz Imroz, a Kashmiri human rights lawyer and a civil rights activist.

“As many as 346 persons were killed in the last one year in which 197 are militants as well and others were civilians and also the armed force personnel,” Imroz, head of the Jammu and Kashmir Coalition of Civil Society, told Anadolu Agency.

Asked about the increase in anti-militancy operations, the police chief said 138 militants have been killed in encounters, including several top commanders.

The police chief said the forces are trying hard to decrease the trend of local youth picking up arms. He added that police are trying to stop the “glamourizing” of militants during funerals.

“New burial management has been very useful in stopping new recruitment into terrorist rank. Several new terrorists have been brought back to mainstream with the assistance of their parents,” he said.

According to the police chief, cease-fire violations by Pakistan have been continuing at the Line of Control (LoC), a defector border between India and Pakistan.

“The counter-infiltration [CI] grid at the border has been strengthened and our army has been using all modern gadgets to detect and foil infiltration bids. So far, three encounters took place at the LoC and eight terrorists have been killed at the border,” he said.

On the increase in recent attacks on security forces, the officer said few attacks were carried out at checkpoints related to the COVID-19 lockdown.

“A total of 13 security personnel were killed. Terrorists have targeted some soft and vulnerable targets like JKP [Jammu and Kashmir Police] personnel and political workers. We have identified some of them [terrorists] and neutralized in the encounters. We have been focusing on preventive intelligence and major attacks have been prevented,” he said.