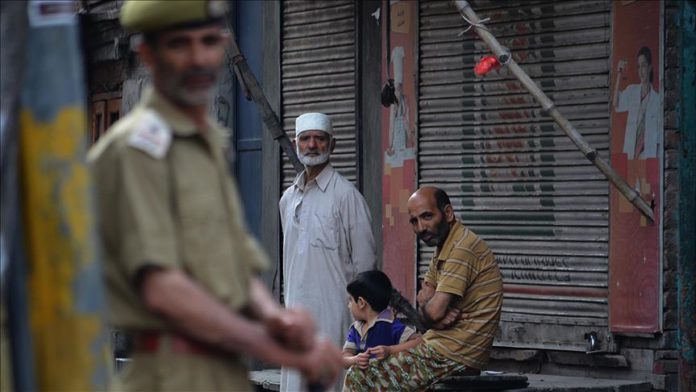 Indian forces prevented people in Indian-administered Kashmir from paying respect at the graves of the 22 Kashmiri Muslims, who had been killed this day in 1931 by soldiers of the last Hindu ruler.

Until Aug. 5 last year, when India scrapped the region’s limited political autonomy, July 13 was a holiday in the official calendar.

Chief ministers of pro-India political parties would shower the graves with flowers and offer prayers. But the incumbent government at New Delhi dropped the day from the list of holidays, heeding to long-standing objections by Hindus in Jammu region, who consider the last Hindu ruler Hari Singh as a hero.

On the other hand, Kashmiris consider July 13 as the beginning of their movement for liberation from foreign rule.

At least 22 men were shot dead outside the Central Jail in Srinagar, where Abdul Qadeer Khan, believed to be a resident of Swat region in now Pakistan was being tried for treason and incitement to violence.

In a speech delivered in June 1931, Khan, a domestic help of a British army officer, had deplored alleged sacrilege of the Quran by Singh’s soldiers and asked people to rise in revolt.

Today, policemen and paramilitary troopers blocked the roads leading to the graveyard in old Srinagar area called Naqashband Sahib. The graveyard, called Martyrs’ Graveyard, is located in the lawns of a shrine built in the memory of central Asian sufi saint, Khwaja Sayed Bahauddin Naqashband Bukhari, the founder of Sufi Naqashbandi order.

A semi-armored vehicle and a police vehicle stood outside the gate of the shrine whose gate had been locked. Scores of police and paramilitary soldiers patrolling nearby stopped a media team from shooting videos and reporting.

“They even stopped an ambulance. They didn’t let any local resident to offer fateha (prayers) at the shaheed mazar [Martyrs’ Graveyard],” Muhammad Altaf, who lives nearby, told Anadolu Agency.

“But they can’t erase the love for our martyrs from our hearts,” he said.

Imran Nabi, spokesman of pro-India political party National Conference, whose founder Sheikh Abdullah was one of the leaders leading agitation against Singh at the time, said the party’s application, mailed four days ago, for permission to visit the graveyard went unanswered by local authorities.

Abdul Razak, another local resident, told Anadolu Agency that the fresh COVID-19 lockdown was imposed in Srinagar city from Monday morning to prevent people from visiting the graveyard.

“It is no coincidence. They reopened gardens and parks on Burhan Wani’s martyrdom anniversary [on July 8]. On Martyrs Day, they imposed a coronavirus lockdown and they have announced that outside tourists can visit Kashmir from tomorrow. It is tyranny everywhere on one pretext or the other,” he said.

However, Altaf Thakur, a spokesman of the ruling Bharatiya Janata Party, told Anadolu Agency that restrictions on people’s movement were imposed due to a spike in COVID-19 cases in Kashmir.

Pakistani-administered Azad Jammu and Kashmir (AJK) and other parts of the country also observed the Kashmir Martyrs Day with AJK Prime Minister Raja Farooq Haider presiding over the main event at Prime Minister’s Secretariat in the capital Muzaffarabad.

Last week, the AJK government announced it will observe the day after the Indian government dropped it from the holiday calendar.

Pakistani Prime Minister Imran Khan said Kashmiris laid down their lives for freedom and today they continue to fight against the “occupied forces who engineered demographic changes to wipe out the Kashmiri people and their identity”.

“We will continue to support this just struggle till IOJK [Indian Occupied Jammu and Kashmir] is liberated from the clutches of Indian illegal occupation. That day is not far,” Khan added.

US: Voter trust on Trump's Supreme Court pick on rise

WHO failed to get virus-fighting data: US health chief