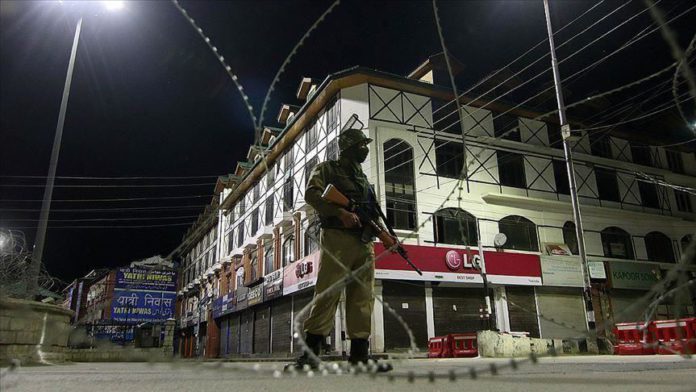 Eight militants were killed in two separate gunfights with the Indian forces in the Indian-administered Kashmir over the past 24 hours, the regional police said on Friday.

The three militants were killed in a Meej encounter in the Pampore area of southern Pulwama district while five more were killed in the Bandpawa area of the Shopian district.

A police officer told Anadolu agency that security forces early morning Thursday launched a cordon and search operation at Meej, South Kashmir after receiving specific information about the presence of militants there.

The official said the search operation turned into a gunfight after militants fired upon a search party which was retaliated and initially one militant was killed on Thursday, but two more militants entered a nearby mosque to take refuge inside it.

“On Friday morning, security forces used tear smoke shells to force the holed up militants out of the mosque, the official said, adding the two were then killed by the forces while maintaining the sanctity of the religious place.”

In another gunfight at the Bandpawa area of southern Kashmir, in Shopian, one militant was killed yesterday while four more were killed today.

Defense spokesperson of the army Col. Rajesh Kalia said the forces had launched the operation in Shopian after receiving intelligence on the presence of militants in the area.

“While one militant was killed in the operation there on Thursday, four more were killed on Friday taking the number of militants killed in the gunfight to five,” the official spokesperson said.

Meantime the limited internet in the twin districts of Pulwama and Shopain was suspended after the encounters broke out.

After the killing of eight militants today, the Inspector General of Police (IGP) Vijay Kumar congratulated the government forces in Kashmir for killing 100 militants in the disputed region so far this year.

Police sources told Anadolu agency that nearly 32 militants have been killed in southern Kashmir for the last 19 days, which include 22 militants killed in Shopian alone in less than a 2-week period.

Pertinently, Vijay Kumar had recently said militancy stands almost wiped out from South Kashmir and the regional police would now shift its focus to North Kashmir from next month.

In an appeal in March, UN Secretary-General Antonio Guterres had urged warring parties across the globe to lay down their arms in support of the fight against the novel coronavirus but the situation in the Indian-administered Kashmir has worsened with the outbreak.

Regional police sources told Anadolu agency that 72 militants were killed alone since the pandemic emerged in the region on March 20, while 102 militants have been killed since the beginning of this year.

August 22, 2020
We use cookies to ensure that we give you the best experience on our website. If you continue to use this site we will assume that you are happy with it.Ok