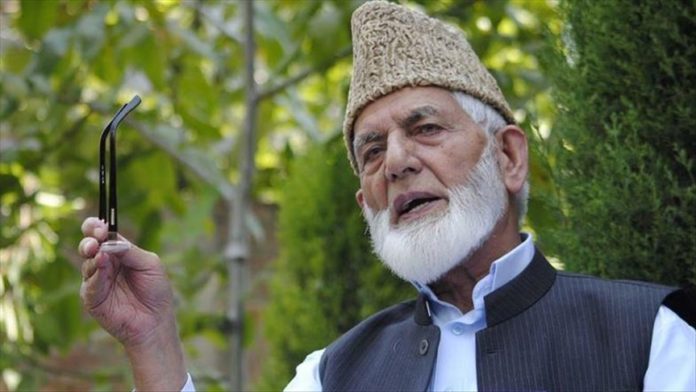 In a statement issued by his Islamabad-based office, the veteran Kashmiri leader said India has maintained its control on Kashmir through “repression, institutionalized discrimination and systematic abuse” of Kashmiri people’s rights.

“December 10 is here again. Although this day is observed as the International Human Rights Day according to the UN calendar, but the ground reality and the bitter truth is that the United Nations and the international community have never been able to stop the violations of human rights of certain people.”

“As the world leaders preach the importance of human rights on this day they must also look within and ask themselves how far their own double standards and criminal silence on matters like Kashmir is responsible for the UDHR [Universal Declaration of Human Rights] not realizing its objectives even after 7 decades of adoption,” the ailing 91-year-old Geelani said.

Human Rights Day is observed every year on Dec.10, the anniversary of the UN General Assembly adopted the Universal Declaration of Human Rights in 1948.

“Kashmir is a glaring example. The history of Kashmiri people’s suffering is as old as the history of the adoption of the Universal Declaration of Human Rights (UDHR) by the United Nations General Assembly. Kashmiri people have been fighting for their right to self-determination since India occupied their land in 1947,” Geelani added.

He accused India of maintaining its control on the region through “repression, institutionalised discrimination and systematic abuse” of Kashmiris’ rights, while the international community neglected the “unabated continuation of Kashmiri people’s plight.”

“Even in 2019, when in an act of naked aggression and blatant violation of international laws and several international and regional instruments, India took the ultimate step of annexing Kashmir; the international community largely remained a mute spectator,” Geelani said, adding that It has been more than a year since and the “situation hasn’t changed. In fact, it has worsened even further.”

On Aug. 5, 2019, the Indian government revoked articles of its Constitution, scrapping the minimal autonomy of the disputed Jammu and Kashmir region.

“A permanent state of fear, terror and uncertainty continues to grip the region as Indian authorities go about implementing their sinister plans by enacting draconian and arbitrary laws aimed at changing the demography of the region. Constant and surreptitious surveillance on the other hand is being used to sustain the atmosphere of fear and uncertainty so that people remain silent,” Geelani said.

Criticizing India’s Hindu nationalist government over alleged restrictions and harassment of journalists in the region, Geelani said local media continued to be gagged and reporters “forced to get their stories pre-approved to ensure that nothing contradicting the official narrative gets published.”

“Newspapers are often forced to fill their pages with the content provided by the authorities. Reporters and publishers resisting this are either arrested or harassed and intimidated into submission,” he said.

He said that despite all the atrocities, human rights abuses and, control tactics, “India has not been able to break the resolve of Kashmiri people and we remain firm in our determination to continue our struggle for the right to self-determination and take it to its logical end.”

“For us, the International Human Rights Day is a soothing reminder that our struggle against Indian occupation and for the right to self-determination is a just and sacred one and it must go on whatever the cost,” he said adding that the world leaders must understand that their silence in the face of “such atrocities and abuses amounts to complicity provides legitimacy to abusive states like India and Israel and encourages them to continue with their despicable behaviour with impunity.”