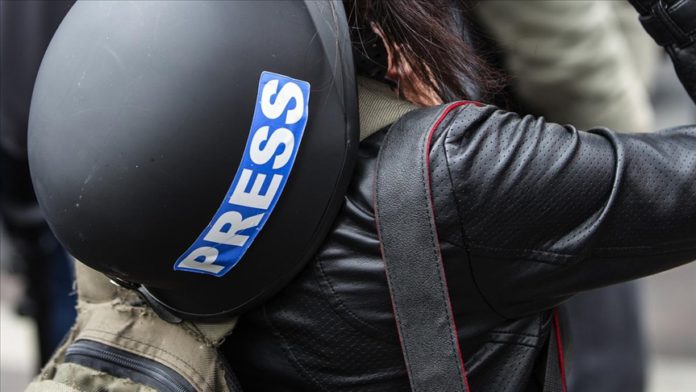 Three Kashmiri reporters told a local journalistic body, the Kashmir Press Club that they were beaten up by the police in southern Kashmir on Wednesday while covering an election.

Fayaz Lolu, who reports from restive southern Kashmir for the local news outlet ETV Bharat, told Anadolu Agency that he and two other reporters, Mudasir Qadri, who works for News 18 Urdu, and Junaid Rafiq, a stringer for TV9, were interviewing a candidate who alleged his party’s supporters were not being allowed to vote by the Indian government forces in the Srigufwara area of the Anantnag district.

Lolu said the police chief of the district, Sandeep Choudhary, meanwhile arrived in the area and beat him and the two others.

“We were taken to police station where, after 20 minutes, Junaid complained of shortness of breath and palpitation. We took him to a hospital where he has been put on oxygen support. I’m calling from the hospital and I think we are still in police custody,” Lolu said.

The police also seized mobile phones, microphones, and logos from the trio, he added.

Fayaz had made a distress call to the Kashmir Press Club, the largest body of journalists in Kashmir, which called for an inquiry into the incident.

“We hope strict action is taken against those found guilty in this act perpetrated in utter disregard of the freedom of the press,” a statement issued by the press club reads.

Bilal Bhat, a news editor of ETV Bharat, told Anadolu Agency that the assault on the press runs contrary to the ruling Bharatiya Janata Party’s claim of promoting freedoms in Kashmir.

“Inspector General of Police [in the Kashmir range] Vijay Kumar has assured that he would look into the facts and also assured to take action in this regard,” said a report by ETV Bharat.

US bans entry of non-US citizens from Brazil over virus