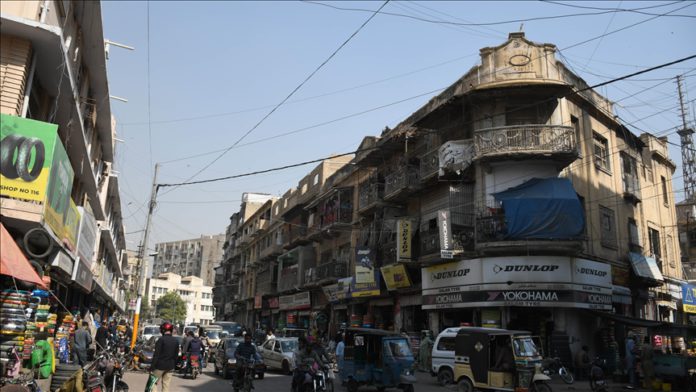 While there has been a name-changing spree in neighboring India, a street in Pakistan’s port city of Karachi is still named after Mohandas Karamchand Gandhi, keeping a window open into pre-partition memories.

On the occasion of the 74th death anniversary of Mohandas Karamchand Gandhi, known worldwide as Mahatma Gandhi, residents vow to protect the historical identity of their neighborhood.

Gandhi, a towering figure of South Asian politics, was assassinated on Jan. 30, 1948 by Hindu extremist Nathuram Godse, who apparently objected to his stand against the communal riots that gripped India after the partition in 1947.

Located in the Karachi South District, Mohandas Karamchand Gandhi street, commonly known as Mohan Road, is a 500-meter thoroughfare currently serving as a bustling market visited by thousands of customers each day.

Its eastern entrance, which touches the noisy M.A (Mohammad Ali) Jinnah Road, is commonly known as Tire Market because of several small and large tire shops. Whereas, the western mouth of the street opens towards the famous Burns Road and is dotted with dozens of bookshops. This portion is known as the Urdu bazaar or the Book Market.

In between lie several colonial-era buildings, with most still named after their original builders, like the Aruan Building, Mukhi Mansion, and Momanath Building.

Aluminum-embossed pictures of Gandhi can be spotted even from a distance on the balconies of several buildings, reminding visitors of the neighborhood’s historic value.

Most of buildings, nonetheless, currently present a picture of apathy, not only due to the ravages of time, but also neglect of their supposed benefactors.

In many cases, neither occupants nor owners worry about the maintenance of these old-styled buildings dating back to the 1930s, due to rental disputes.

In the middle of the road, it is bisected by Temple Road, named for its Hindu temple, along with the Sikh temple Ratan Talao Gurdwara, another pre-partition building that is also in ruins nowadays.

Hunched on a plastic chair, Mohammad Feroz, who has been running a tire shop at Gandhi street for over 40 years, wants the government to protect the historical value of the neighborhood.

“You may disagree with his (Gandhi) political philosophy, but he undoubtedly is a historic figure. It’s either Quaid-i-Azam (Mohammad Ali Jinnah, the founder of Pakistan) or Gandhi, they should be treated with respect in both countries,” Feroz told Anadolu Agency, referring to some Hindu nationalist groups demanding the removal of Jinnah’s statue from Ali Garh Muslim University, India.

A plaque reading “Mohandas Karamchand Gandhi Street,” which only a few years ago had stood at the eastern entrance of the street, is no longer there.

Officially, however, it is still named after Ghandi in the city’s municipal records.

“We will never want this name to be changed,” Rab Nawaz, who runs a small mechanical shop in the area, told Anadolu Agency.

“It’s Mohan Road and will remain the same for us. We have no issue with that,” Nawaz, whose father started the business here in 1955, went on to say.

Feroz Ali, another elderly resident, demanded that the plaque be returned, highlighting the street’s name on both entrances.

“Not only this, but no other names should be changed. If a hospital or educational institution is built by a Hindu or a Sikh, it should remain after his or her name,” he told Anadolu Agency.

So much so, a number of restaurants and bakeries have been named after Indian cities, mainly by those who migrated from India in 1947. Bombay Bakers in Hyderabad city, located some 165 kilometers (102 miles) from Karachi, is famous for its special cakes as hundreds visit the eatery every day to taste its delectable dessert.

Mohatta Palace, the city’s main museum, is named after Hindu businessman Shivratan Chandraratan Mohatta, who built it as a summer home in 1927.

However to the surprise of many, Gandhi Mart, a local Karachi grocery store often assumed to bear the name of the Indian leader, has nothing to do with Mahatma Gandhi. It is named after Muslim family with the same last name, enjoying the publicity afforded by the common misconception.

“It’s our family name after the neighborhood where our forefathers would live in Indian Gujrat,” Danish Gandhi, the owner of the mart, said, speaking to Anadolu Agency.

“Mostly, people mistook us for the Indian or Hindu Gandhis,” said another young Gandhi.

“Sometimes, they get surprised when they see a Gandhi offering (Muslim) prayers in a corner of the mart,” he said, smiling.

Gandhi said neither he nor the rest of his family have ever faced any trouble because of this name and have no plans to change it.

“I rather enjoy it when I see people curious (about the name).”

Gandhi has long been a part of Karachi’s cultural life. Located in the heart of the city, the Karachi Zoological Garden was once known as Gandhi Garden. The site had long been a hub of political and social gatherings.

According to Abdul Ghafoor Khatri, a Karachi-based author who often writes about culture and heritage, the garden was named after Gandhi in 1934. Previously, it had been known as Victoria Garden.

In 1953, the venue was named Karachi Zoological Garden through a resolution adopted by the municipality, Khatri told Anadolu Agency.

A plaque at the entrance of the colonial-era building of the Karachi Chambers of Commerce said it was laid by Gandhi in July 1934.

Film on Iranian female athletes to be released Sunday