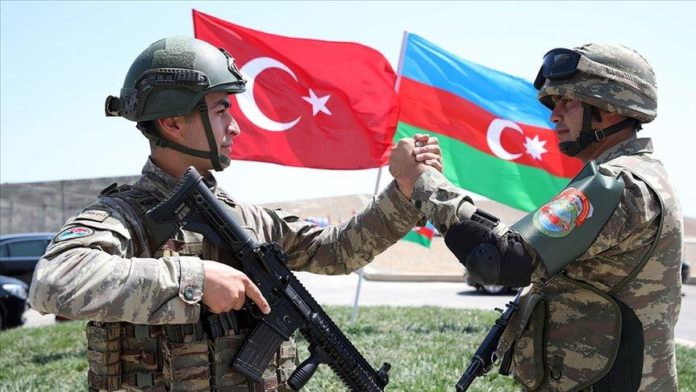 The resolute, consistent, and solution-oriented support to Azerbaijan that liberated Nagorno-Karabakh from the Armenian occupation, and the opening of the Nakhchivan corridor — a centuries-old dream – is the biggest win for the Turkish foreign policy in 2020, according to experts.

The opening of the corridor is the beginning of a new era for Turkish foreign policy in the region stretching from the Caucasus to Central Asia.

Turkey pursued a proactive foreign policy in the Eastern Mediterranean, Libya, Syria, Iraq, and the Caucasus while combating the novel coronavirus that has affected the entire world in 2020.

In Nagorno-Karabakh, where the Organization for Security and Cooperation in Europe (OSCE) Minsk Group did not produce any solution despite UN resolutions, Turkey’s military, political, and diplomatic efforts brought results.

The 44-day Karabakh War, which started with border violations and attacks by Armenia, ended in Azerbaijan’s victory.

At the end of the war, the Nakhchivan-Azerbaijan corridor, which had been the dream of the Turkic world for over a century, was opened, restoring Turkey’s land connection with the Central Asian Turkic Republics.

The Karabakh victory is considered the most important achievement of Turkish foreign policy in 2020. Turkey is also now focusing on increasing its political, military, and economic weight in the region.

Speaking to Anadolu Agency, Aygun Attar president of the Turkish Azerbaijan Friendship Cooperation and Solidarity Foundation (TADIV) stated that the most important event that marked Turkish foreign policy in 2020 is its Karabakh policy. She said that it should not be evaluated only in the context of brotherhood or “one nation two states”.

Attar stressed that Russia continues to convey the message that it is the dominant power in the South Caucasus region, where geopolitical risks are intense. But with a persistent attitude, Turkey has carved a place in the region using a mix of diplomacy and hard power achieving successful results.

After the failure of the OSCE Minsk Group in the Karabakh conflict, lasting over 30 years, Azerbaijan took Turkey to the table, said, Attar.

“The Karabakh conflict became part of Turkish foreign policy. Turkey took part in the process as an active actor during the 44-day war period,” she said.

Attar said the skillful stance of Turkish President Recep Tayyip Erdogan and his Azerbaijani counterpart Ilham Aliyev accelerated the success and led the opening of “the Eurasian gateway the Nakhchivan corridor”.

Attar said that Turkey’s public diplomacy together with Karabakh-centric foreign policy also went down in history as a diplomatic victory for both Turkey and Azerbaijan.

She stressed that the invitation extended to President Erdogan to attend the Karabakh victory parade and his presence there with a large delegation is the beginning of a new era in the South Caucasus region. She said this event has left a lasting mark on 2020.

Ibrahim Ethem Atnur, professor at the National Defense University said that the Turkish foreign policy, which has been advancing decisively and consistently over the past 30 years, clearly stood by Azerbaijan in its just cause.

He recalled that Turkey was also on Azerbaijan’s side in the 1990s, but for the first time, it achieved success using all its diplomatic instruments.

“It also led to the realization of the Nakhchivan Corridor, a 100-year dream in Turkish foreign policy,” said Atnur.

Recalling that the biggest goal of Turkey and the Turkic world in 1918 was to provide transportation through Zengezur, the professor said: “At that time this was not possible. The second opportunity came in 1992. But this opportunity also ran away because Turkey was not interested enough. The missed opportunity that day was realized today due to Turkey’s determined stance.”

Stressing that Ankara’s courageous foreign policy bothers some countries and groups, Atnur pointed out that Israel, the US, and France accused Turkey of being “expansionist” and “Islamist”.

“The success achieved in the field in Karabakh is a result of the military, commercial and cultural rapprochement, training-equip agreements with Azerbaijan in recent years,” he said.

“As a result of the effective policy of the Turkish foreign ministry in the Karabakh issue, Iran has become unable to act comfortably in the region. The fact that mass organizations in Turkey and Azerbaijan have drawn the Turks in Iran into this issue, it prevented the political and military support that the Iranian state used to give to Armenia, as in the past,” said Atnur.

“Iran has been unable to act comfortably in the region. Mass organizations in Turkey and Azerbaijan have drawn the Turks in Iran into this issue has prevented the political and military support that Iranian state has given to Armenia, as it had done in the past,” he said.

Giray Saynur Derman, a professor in Communication Faculty of Marmara University also said that the resolution of the Karabakh conflict, which had become a “frozen conflict”, is the single most important achievement of Turkish foreign policy in 2020.

He said that the opening of the Nakhchivan corridor through the territory of Armenia near the Iranian border linking Turkey and Azerbaijan by land for the first time in a century is another achievement.

“According to Article 9 of the agreement, barriers to economic and transport links in the region will be removed. Transport and communication networks will be built between the Nakhchivan Autonomous Republic and the western regions of Azerbaijan,” he added.

Derman hoped that the opening of the Nakhchivan corridor will revive the historical Silk Road by creating strong support to the Baku-Tbilisi-Kars route, as well as connecting Turkey and the Central Asian Turkish Republics by land.

He said Turkey has further increased its power as a major player in the South Caucasus, adding that the new conjuncture arising out from the Azerbaijan-Turkey partnership will also lead to the strengthening of the bond between the Turkic states.

“Aliyev and Erdogan showed to the world the strong image of the two states with an emphasis on unity and togetherness in their magnificent speeches at the Baku victory feast on Dec. 10,” the communication professor added.

“Heydar Aliyev’s poem One Nation Two States as this pride, reflects this joy experienced by the people of the two countries at the same time,” said Derman.