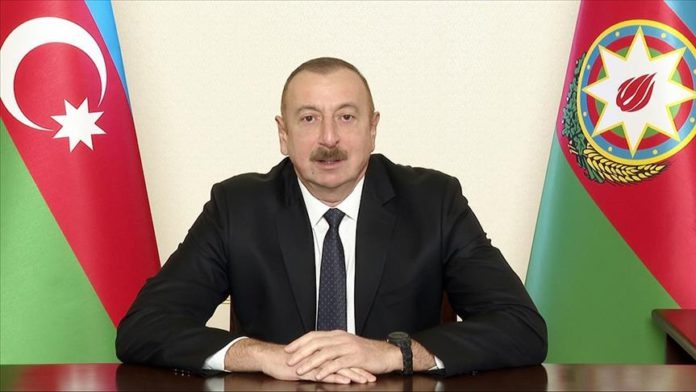 The president of Azerbaijan announced on Wednesday that his country, along with international companies, had begun assessing the damage caused by Armenian forces in recently liberated areas in Upper Karabakh.

Receiving Salim al-Malik, the director-general of the Islamic World Educational, Scientific and Cultural Organization (ISESCO), President Ilham Aliyev indicated that Baku is preparing to file a lawsuit against Yerevan in international courts over the material, cultural, moral, and environmental devastation allegedly caused by Armenian forces before they withdrew from the region in November.

Aliyev accused Armenia of seeking to erase the signs of Azerbaijani culture in the area, also known as Nagorno-Karabakh, and said internationally recognized firms had helped in the assessment effort that would help Baku take legal steps against “aggressor” Yerevan.

He alleged that under decades of Armenian occupation, a total of 70 mosques had been torn down in Upper Karabakh, adding that his government was determined to rebuild them all.

Malik, for his part, welcomed Azerbaijan’s victory that came after weeks of fighting and said the destruction wrought by Armenian forces in the liberated areas was a crime against humanity, adding that he had personally witnessed the extent of this during his visit on Tuesday.

Relations between the former Soviet republics have been tense since 1991 when the Armenian military occupied Upper Karabakh, also known as Nagorno-Karabakh, internationally recognized as Azerbaijani territory, and seven adjacent regions.

During the six-week-long conflict, Azerbaijan liberated several cities and nearly 300 settlements and villages, while at least 2,802 of its soldiers were martyred. There are differing claims about the number of casualties on the Armenian side, which, sources and officials say, could be up to 5,000.

The two countries signed a Russian-brokered agreement on Nov. 10, 2020, to end the fighting and work towards a comprehensive resolution.

ExoMars-2020 mission delayed due to coronavirus