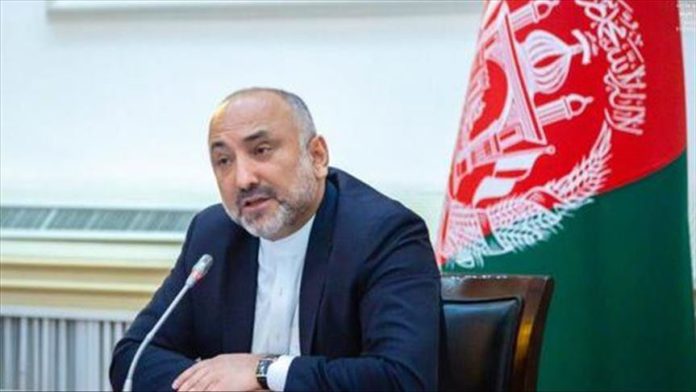 Afghanistan’s foreign minister Monday thanked his Turkish counterpart for supporting a sovereign and democratic Afghanistan in the historic intra-Afghan talks which began over the weekend.

In a series of tweets, Mohammad Haneef Atmar hailed Turkey for its support to the war-ravaged country as the Afghan government and Taliban insurgents embark on landmark peace talks.

“Thank you my brother Mevlut Cavusoglu for your strong statement of support for a sovereign & democratic Afghanistan. Your call for a humanitarian ceasefire and cessation of bloodshed is the voice of all Afghans. We appreciate your emphasis on a fair & lasting peace,” he tweeted.

Thank you my brother @MevlutCavusoglu for your strong statement of support for a sovereign & democratic Afghanistan. Your call for a humanitarian ceasefire and cessation of bloodshed is the voice of all Afghans. We appreciate your emphasis on a fair & lasting peace.

On the maiden day of the talks in the Qatari capital, Doha, Cavusoglu highlighted that a humanitarian cease-fire must be the priority as “fighting and talking cannot go together.”

“The ultimate objective shouldn’t be any form of peace but a fair and lasting one,” he said, adding that Turkey backs coordinated regional efforts supported by the wider international community for better regional connectivity, development, and reconstruction.

“We are ready to contribute to this process in every possible way, including hosting one round of the negotiations, as the largest international platform regarding Afghanistan, the heart of Asia, Istanbul process can be utilized particularly to support the post-peace efforts,” he stressed.

In Doha, contact groups from the Afghan government and the Taliban’s negotiating teams met on Monday.

Nader Nadery, a senior member of the Afghan government team, said in a statement they discussed the code of conduct between two sides, schedules of upcoming meetings, and relevant issues.

For the Taliban’s part, spokesman Mohammad Naeem also tweeted Sunday: “The communicating committees of intra-Afghan negotiation teams conducted a meeting after Maghrib [evening] prayer today and discussed the schedule and focal principles of the upcoming meetings.”

The landmark intra-Afghan peace talks in the Gulf state follow a US-Taliban deal reached in February. The two sides are aiming for political reconciliation and an end to decades of violence.