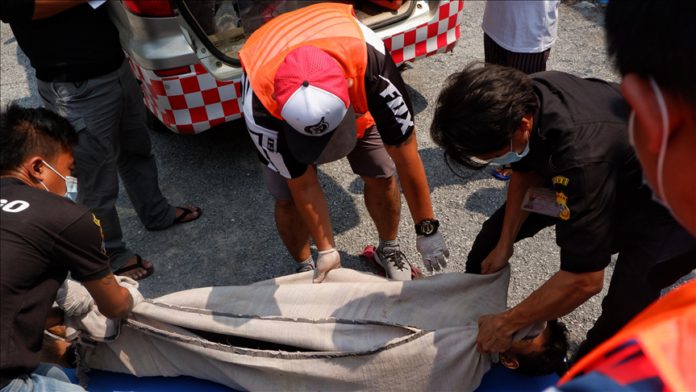 At least seven more people were gunned down by security forces during anti-military protests in Myanmar on Sunday.

Six of them were killed in the commercial capital Yangon, according to witnesses and local media reports.

“Three people were shot in the head by soldiers. A fourth injured person died on the way to hospital,” said Zay Phyo, one of the leaders of a demonstration in Hlaing Thar Yar, the most populated township of Yangon.

There was heavy security presence around protest sites in the area since early morning on Sunday.

Several more people were injured as troops fired tear gas, stun grenades, rubber bullets, and live ammunition in a bid to disperse crowds and remove makeshift barricades put up by civilians on a major road in the area.

“We had anticipated such a violent crackdown and have prepared to defend ourselves as much as we can,” Phyo said, stressing that protesters were still holding their ground.

A rescue worker said at least three dead bodies were picked up from the area.

“We have seen several people with gunshot wounds, so the death toll is very likely to rise,” she told Anadolu Agency over the phone.

Photos circulating on social media showed at least five trucks packed with troops crossing a bridge leading to Hlaing Thar Yar, with plumes of black smoke visible in the distance.

A witness in Insein township, located next to Hlaing Thar Yar, said troops destroyed makeshift barricades set up by protesters and set alight tires as they passed through the area.

Another person died after being shot in the head in Pyay, a town in central Myanmar, according to the news outlet.

Despite the increasing brutality of the military junta, there has been no letup in demonstrations against the Feb. 1 coup across Myanmar.

Nearly 90 have been killed by troops so far, with more than 2,000 detained throughout the country.

In a video address on social media on Saturday night, Mann Win Khaing Than, a senior member of ousted State Counselor Aung San Suu Kyi’s party, urged people to continue their resistance against the military junta.

In hiding along with other legislators since the coup, he was last week appointed as vice president by the Committee Representing Pyidaungsu Hluttaw (CRPH), which was formed by lawmakers of Suu Kyi’s National League for Democracy (NLD).

“This is the darkest moment of the nation and the moment that the dawn is close,” he said, telling supporters that the civilian government will
seek ways to legislate the required laws so that people have the right to defend themselves against the military.