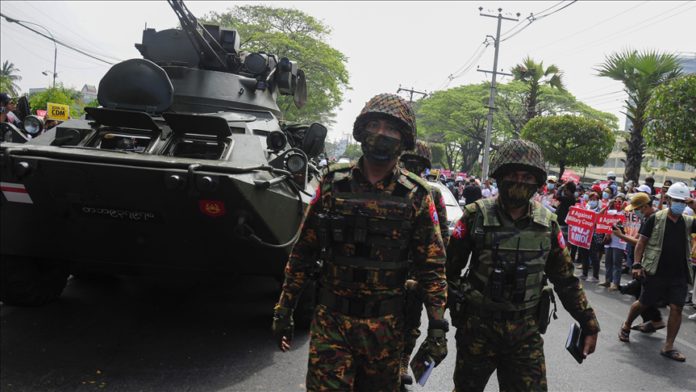 The junta regime in Myanmar resorted to “brazen tyranny” since it launched a coup and overthrew the elected government, said a new report released on Tuesday.

“In the past year, the Burmese military unleashed new military campaigns throughout the country, tortured and murdered civilians, burned down entire villages, and used sexual violence as a weapon of war,” said London-based Burma Human Rights Network (BHRN) in its report.

The report said the coup faced “peaceful protests” which “evolved in some cases into ‘self-defense’ units.”

However, it warned that the “threat of a full-blown civil war lingers over the country, skirmishes have begun in previously calm areas, and war resumed in ethnic regions.”

On Feb. 1, 2021, Myanmar’s military seized power after allegations of fraud in the 2020 general elections.

The army arrested leaders and officials of the then-ruling National League for Democracy party along with State Counselor Suu Kyi and declared a state of emergency which has been extended until the middle of this year.

Suu Kyi faced a number of cases and was sentenced to six years imprisonment for charges that included violating coronavirus restrictions and possessing “illegally imported” walkie-talkies.

The military takeover has triggered mass protests and a crackdown on dissent, with more than 1,500 civilians killed, according to the Assistance Association for Political Prisoners, a local monitoring group.

The BHRN said the coup had triggered a “new refugee crisis” as the fighting has displaced hundreds of thousands.

“There is precious little time for the world to prevent worse crises. The anniversary is a stark reminder of the consequences of global inaction.

It called for sanctions on the Burmese military’s sources of income and blockade on their access to weapons.

“The junta is taking advantage of a world distracted by COVID-19 and economic crisis to unleash hell on its population and cling to power. The world must not allow them to continue,” it stressed.