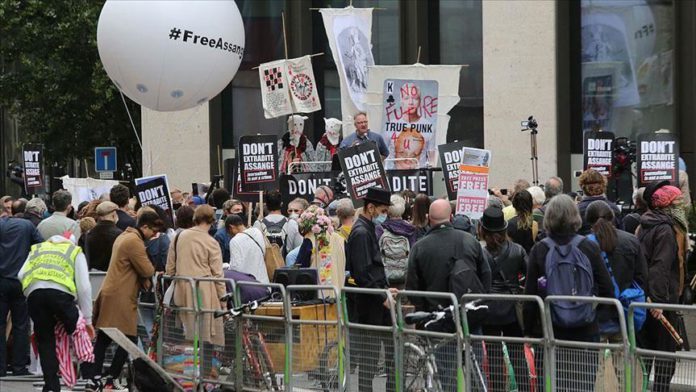 Founder of WikiLeaks Julian Assange is appearing Monday in the final hearing of a case on his extradition to the US, where he faces multiple espionage charges, which could bring a lengthy jail term.

The hearing is scheduled for around four weeks concerning allegations brought by the US Department of Justice.

Assange will face 18 counts of hacking the US government computers and violating the espionage law if he is extradited to the US and a potential prison sentence for years.

He was dragged out of Ecuador’s embassy building in London last year, where he took refuge for more than seven years.

Assange was due for a release on Sept. 22 last year, but he is being held for longer on “substantial grounds” that he would abscond.

“If this extradition is allowed, it will send a clear signal that journalists & publishers are at risk whenever their work discomforts the United States government,” the National Union of Journalists said in a statement.

The WikiLeaks on Monday has published Assange’s defense skeleton argument in two parts.

Various human rights organizations and freedom of speech groups have condemned the US extradition request.

Amnesty International has said Assange is at risk of “serious human rights violations including possible detention conditions that would amount to torture and other ill-treatment” in the US.

Meanwhile, Kristinn Hrafnsson, the editor of WikiLeaks, said on Twitter that observers are not allowed to follow the trial. “This is not open justice,” he said.

A group of protesters, including the father of Assange, gathered in front of the Old Bailey to show solidarity with the WikiLeaks founder.

If extradited to the US and found guilty of charges, Assange will face up to 175 years of prison term.