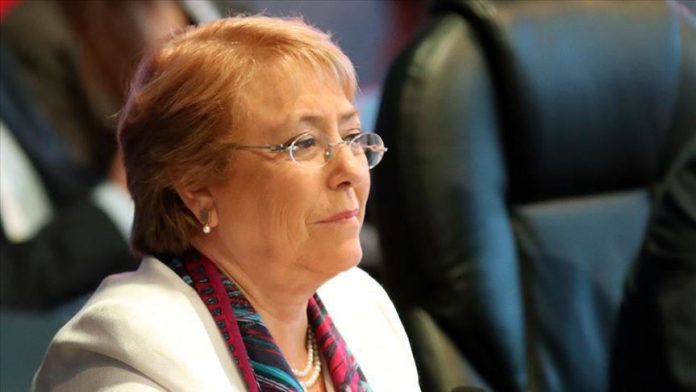 The UN’s human rights chief said on Thursday she is appalled by the number of human rights violations against journalists across Yemen — including killings, disappearances, and death sentences.

Since the start of April, the UN Human Rights Office said, it had documented one assassination, one abduction, three arbitrary arrests and detentions, the sentencing of four journalists to death in violation of international human rights law and jailing of six others, three physical assaults and threats of physical violence.

“It is with great sadness we have seen the situation in Yemen slide from bad to worse, to the point now where it is considered the world’s largest humanitarian crisis,” said the UN High Commissioner for Human Rights, Michelle Bachelet.

“Those responsible for reporting on the atrocities committed during the armed conflict and the accompanying pain and suffering endured by civilians are themselves being targeted.”

She said that journalists are under attack from all quarters.

“They are killed, beaten, and disappear; they are harassed and threatened, and they are jailed and sentenced to death for merely trying to shine a light on the brutality of this crisis.”

On April 11, the Specialized Criminal Court in Sana’a, under the jurisdiction of the Houthi rebels, sentenced four journalists to death and six others to jail.

They were jailed on charges of “publishing and writing news, statements, false and malicious rumors and propaganda with the intent to weaken the defense of the homeland, weaken the morale of the Yemeni people, sabotage public security, spread terror among people and harm the country’s interest.”

Concerns are growing that the authorities there might carry out the death sentence against the four journalists, despite a pending appeal of the conviction before the Appellate Division of the Specialized Criminal Court.

The UN opposes the use of the death penalty in all circumstances. It says the death penalty is an extreme form of punishment reserved for the “most serious crimes,” appertaining only to crimes of utmost gravity involving intentional killing.

During their five-year detention, the four journalists were denied family visits, access to their lawyers, and healthcare. They were also reportedly tortured and subjected to cruel, inhuman, and degrading treatment.

In April, the Specialized Criminal Court ordered that the other six journalists who received prison sentences be released and placed under police surveillance. Only one of them was released.