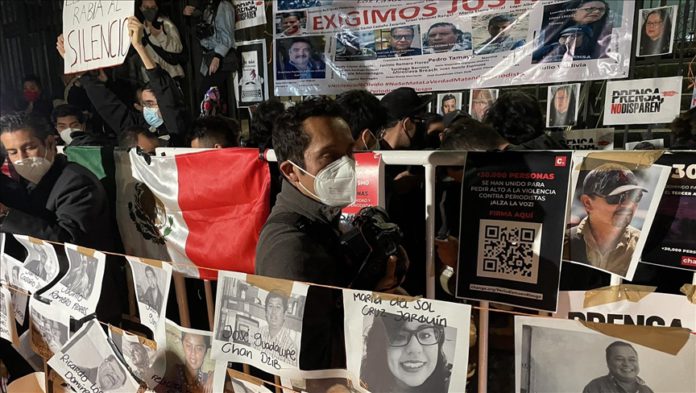 Journalists across Mexico staged protests Tuesday over the recent killings of three reporters, demanding that authorities address the rampant wave of violence against the press.

The murder of three journalists within the last two weeks ignited outrage among journalists and activists, who demonstrated outside government buildings throughout the country.

Lourdes Maldonado was shot dead inside her car last Sunday outside her residence in the city of Tijuana. She had just won a lawsuit against the media company Primer Sistema de Noticias (PSN), which she had been suing for years for unfair dismissal. PSN is owned by Jaime Bonilla, a businessman and former governor of her home state of Baja California.

A week before, on Jan. 17, Margarito Martinez Esquivel, a photojournalist also from Tijuana who specialized in crime and public security in his town, was shot in the head outside his home as he left for work.

Journalist Jose Luis Gamboa Arenas from Veracruz was reported missing on Jan. 12. After a three-day search, his relatives were notified of his death after his body was found with stab wounds.

International organizations such as the Committee to Protect Journalists have expressed concern over the impunity and overwhelming violence against members of the press, reporting that Mexico is one of the deadliest places to practice journalism worldwide.

According to the human rights organization Article19, since 2000, 148 journalists have been murdered in Mexico, with 28 of the killings taking place during the administration of current President Andres Manuel Lopez Obrador.

Alejandro Encinas, the Mexican deputy interior minister responsible for human rights, said on his Twitter account that from December 2018 to October 2021, 47 journalists had been murdered in the country.

In addition, investigations and prosecutions have consistently failed in the country. As reported by Encinas, of the 47 cases of murdered journalists, only 10.6% of them ended up in a conviction.

Mexico does have a program dedicated to protecting journalists against threats and violence. The Protection Mechanism for Defenders of Human Rights and Journalists enrolled 510 journalists from July 2010 to December 2021.

Even though Maldonado was under the protection of this program, she was still murdered outside her home.