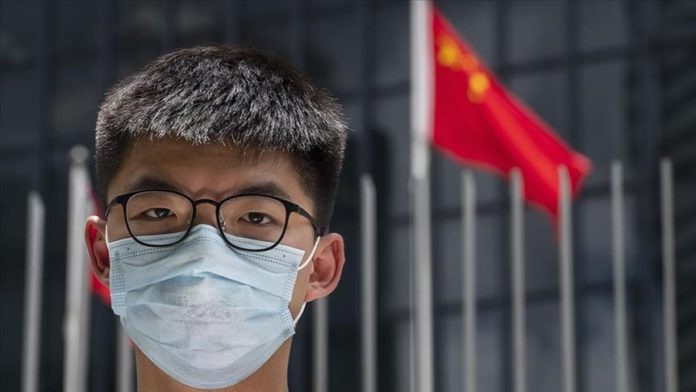 A court in Hong Kong on Wednesday sentenced pro-democracy activists Joshua Wong, Agnes Chow, and Ivan Lam to jail for their roles in a “siege” of a police building during last year’s mass protests, local media reported.

Wong, 24, who was arrested in September, pleaded guilty to two charges and was sentenced to 13 and a half months in prison, according to the South China Morning Post.

Prosecutors told the court that Wong led the 15-hour protest outside the Hong Kong police headquarters on June 21 last year.

They showed videos of him calling for more people to come and “completely besiege the police headquarters.”

Magistrate Wong Sze-lai criticized Wong for targeting the police in a premeditated plot, calling him “selfish” for obstructing traffic at the massive rally, read the report.

The court found that phone messages showing Wong planning the event a day ahead proved premeditation.

The magistrate said the trio had committed the offenses at a time of “social unrest and large-scale public protests,” which “makes this case more serious.”

The ruling also means that all three activists cannot take part in any local elections for five years, as Hong Kong law bars any candidate jailed for more than three months from contesting elections for half a decade, the report said.

In a message posted on Facebook through his lawyers, Wong said: “I know this is tough. But I will carry on.”

Wong rose to fame during the anti-government protests that rocked Hong Kong last year over a now-withdrawn extradition bill that would have allowed suspects to be extradited to mainland China.

International media pegged him as the front man of the demonstrations, with numerous profiles and interviews published by western news outlets.

Wong was arrested late in September for participating in an unauthorized assembly in October last year.

He also spent two months in jail for contempt of court in 2017 and was disqualified from taking part in district council elections last year.

Hong Kong was a British colony up until 1997 and is now a semi-autonomous Chinese territory.

Following last year’s unrest, China imposed a contentious national security law in Hong Kong this July, triggering criticism by western nations who have described it as a move strengthening Beijing’s grip over the region.