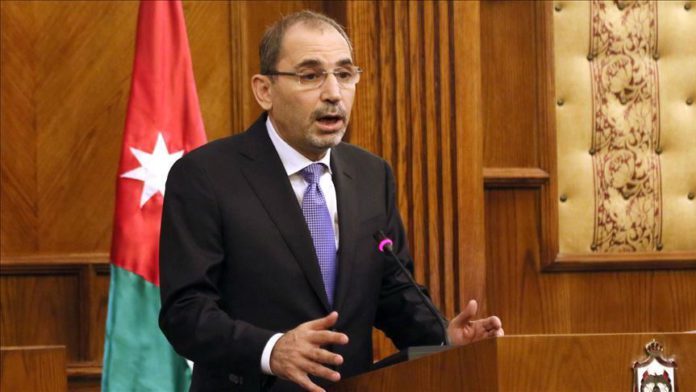 Israel should choose between a just peace and the option to continue the conflict, a top Jordanian diplomat said Thursday, referring to an agreement between the United Arab Emirates (UAE) and Israel to normalize ties.

Jordan’s Foreign Minister Ayman al-Safadi said in a statement that the impact of the deal on peace efforts is linked to the actions that Israel will take.

The Jewish state and energy-rich Gulf state have agreed to normalize relations, US President Donald Trump said Thursday, with Tel Aviv agreeing to delay its controversial plans to annex large swathes of the occupied West Bank.

“If Israel sees the agreement as an incentive for the end of the occupation and the return of the Palestinian people’s right to freedom and to establish their independent state on the 1967 borders with Eastern Jerusalem as its capital, the region will move towards a just peace. However, if Israel does not do this, the conflict will deepen and threaten the whole region,” al-Safadi said.

The Islamic Action Front, the political arm of Jordan’s Muslim Brotherhood group, described the deal as “stabbing the Palestinian issue.”

In a statement, the political party said the deal meant “betraying the nations who oppose any normalization with the Zionist enemy.”

The attitude of Palestine and Jordan against the annexation plan is the reason that pushed Israel to back down from its implementation, the statement said, adding some of the Arab regimes “gave the green light to Israel” in implementing plans to eliminate the Palestinian issue.

Noting that the agreement does not represent the attitude of the UAE people supporting the Palestinian issue, it said the UAE’s step was “a dark day in the history of the Arab nations.”

The Islamic Action Front also urged the UAE to take a step back from the move, which was a result of the normalization work with Israel “secretly conducted for years.”

While the deal has been welcomed by some nations, it has sparked tremendous outrage in most Muslim countries.