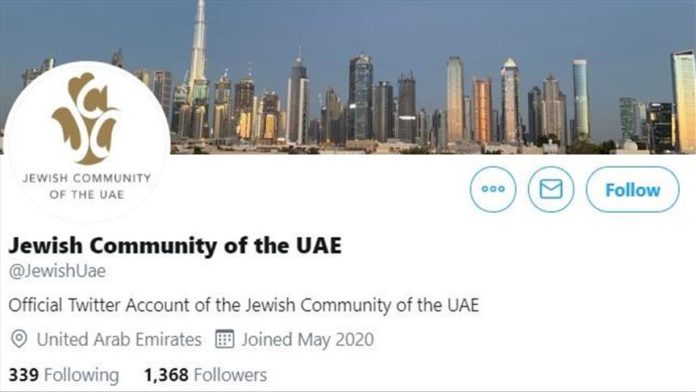 Jews living in the United Arab Emirates (UAE) have launched a Twitter account to represent their 3,000-strong community.

Shortly after being launched in May, the account has attracted more than 1,000 followers.

On June 1, the account tweeted prayers in Hebrew for the Gulf state and its army, in a sign of improving relations between Abu Dhabi and Tel Aviv.

A video posted on the account begins with a desert scene and the figure of a man clad in the traditional long white robe worn by Emiratis, holding a large UAE flag. It cuts to a room set up as a synagogue, with a man in a Jewish prayer shawl shot from behind.

The authenticity of the video could not be verified.

According to the Yeshiva World news portal, there are up to 3,000 Jews in the UAE, who originally came from the US, Europe and South Africa.

Bloomberg said the Jewish community in the UAE began to be visible due to the improved relations between the Gulf state and Israel.

The project, which is expected to be completed by 2022, will serve as a mosque, church and a synagogue.

There are no diplomatic relations between the UAE and Israel.

In October 2018, the UAE authorities, however, gave permission to Israeli athletes to participate in the International Judo Federation Grand Slam tournament in Abu Dhabi.

In August 2019, Israeli newspaper Haaretz reported that the UAE has reached a deal worth almost $3 billion with Israel to supply advanced intelligence capabilities, including two spy planes, to the Gulf state.