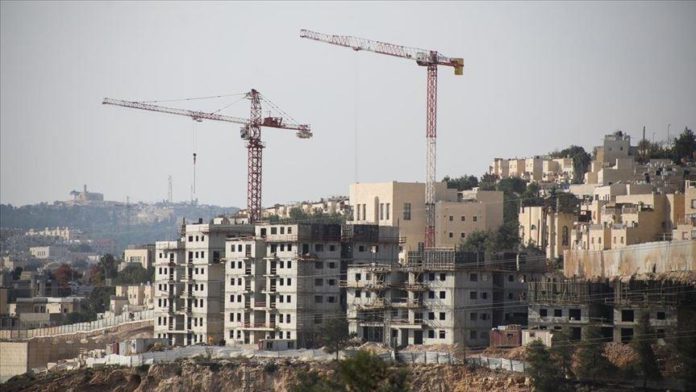 Around half a million Jewish settlers live in more than 250 illegal settlements built on occupied Palestinian territories in the West Bank.

To encourage more settlers to move to the West Bank, the Israeli government offers many economic privileges, including tax exemptions, to settlers who choose to live in these settlements, built on Palestinian lands occupied by Israel since 1967.

Speaking to Anadolu Agency, many Jewish settlers in Ma’ale Adumim settlement – one of the largest in the West Bank with a population of approximately 70,000 people – said they consider settlements “part of Israel.”

“According to the Torah, God gave us this country and God said we need to be here. We are here because God told us to be here,” Ester, a Jewish settler of Ukrainian origin who preferred not to mention her last name or profession, told Anadolu Agency.

Ester refused to continue the interview when asked about the Palestinian people who used to live on this land before. “This is our country!” she added while going away.

David Ha’ivri, a Jewish settler who came from the US, said the population of the settlements should grow more and be included in Israel.

Idan Zendi, another settler, believes that the settlements are built on an “Israeli land not Palestinian.”

He went on to say: “Without us they will be still living with horses and donkeys. If you look back to history or look into the Bible, every book you read indicate that Israelis lived here many years before the Palestinians.”

Elyezier Endi, a dentist, believes that Palestine did not exist and that settlements were not built on an occupied territory. “The settlements are part of Israel, including the whole West Bank.”

Yosi, who preferred not to mention his last name, said he preferred to live in settlements in the West Bank “because it is cheaper”.

“It is cheaper to live here than in other places. It is 30% less. There were some privileges many years ago but they stopped it,” he added.

According to a report by Israeli human rights groups B’Tselem and Kerem Navot, the settler population in the occupied West Bank has risen 42% since 2010, with roughly 440,000 settlers living in the occupied territory of West Bank .

The West Bank, including East Jerusalem, is seen as occupied territory under international law, thus making all Jewish settlements there illegal.

The EU has repeatedly called on Israel to end all settlement activity and to dismantle the already existing ones since 2001.

Turkey: Beating virus in May could bring holiday cheer