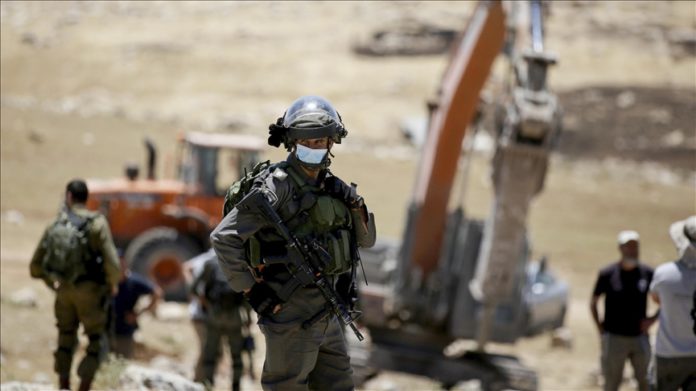 The coronavirus pandemic has exacerbated the already strenuous situation in occupied East Jerusalem in 2020, according to Palestinian officials, making it one of the most difficult years for the city since its occupation in 1967.

In separate interviews with Anadolu Agency, the officials indicated that the pandemic coincided with an escalation of “Judaization” through the Israeli authorities’ establishment of new settlements, the demolishing of Palestinian homes and arrests and deportations from Al-Aqsa Mosque, Islam’s third-holiest site, which has recently been frequently stormed by Israeli settlers.

Meanwhile, the US continues to support Israel despites its violations.

“Deal of the Century” and settlements

The so-called “Deal of the Century” formally announced in January by US President Donald Trump has granted Israel sovereignty over East Jerusalem with the possibility of a Palestinian capital in the city’s suburbs.

Since then, Israeli authorities have scaled up plans to build new settlements while demolishing more Palestinian homes. In addition, Palestinian cultural, social and sports activities have also been prevented, a sign of Israel trying to exercise full control over the city.

Khalil al-Tafakji, director of the Jerusalem-based Arab Studies Society’s cartographical department, said “2020 was a difficult year by all standards, whether it was related to settlement projects or building settlement streets, proposing projects that change the city’s Arab character, demolishing homes, evicting Palestinians and seizing their homes.”

“All Israeli practices are aimed at strengthening its claim for a Greater Jerusalem on the ground and to prevent the possibility of any future negotiations on a Palestinian capital in East Jerusalem,” Al-Tafakji noted.

Israel has demolished more than 165 structures in Jerusalem, the UN Office for the Coordination of Humanitarian Affairs (OCHA) said earlier this month.

On the other hand, the Palestinian Ministry of Jerusalem Affairs warned in a statement that the Israeli authorities plan to build more than 17,700 settlements in the city.

Meanwhile, local sources have told Anadolu Agency that the Israeli authorities have informed some families in two neighborhoods in the town of Silwan to evacuate their homes and pave the way for new Israeli settlers.

Sheikh Azzam Al-Khatib, director general of the Islamic Endowments Department in Jerusalem, said that more than 16,000 settlers have stormed Al-Aqsa Mosque since the beginning of the year.

“It was a difficult year, with Israeli settlers storming the mosque while mosque guards and worshipers have been repeatedly deported by the Israeli police,” added Al-Khatib, who also pointed that the coronavirus pandemic had previously led to the closure of the complex to stem the spread of the virus.

Meanwhile, more than 3,500 arrests — the majority of them boys — have been recorded in Jerusalem in 2020, with the bulk of them taking place in Issawiya town, according to Nasser Qous, director of the Palestinian Prisoners Club in Jerusalem.

The overall virus case count stood at 15,925, including 132 deaths, the Palestinian Ministry of Jerusalem Affairs announced on Dec. 12. This has dealt a big blow to the city’s economy.

Ziad Al-Hammouri, director of the Jerusalem Center for Economic and Social Rights, stressed on the “catastrophic” effects both the pandemic and the political developments have had on the Palestinian economy during the year.

“The Palestinian economy in East Jerusalem received a very heavy blow during the year 2020,” said Al-Hammouri, adding the tourism sector, which forms the backbone of the city’s economy, has particularly received “a very painful blow.”

The Israeli Peace Now human rights movement says that Israeli settlements in the occupied Palestinian territories have doubled over the past four years since US President Trump took office.

The UN General Assembly (UNGA) condemned Israel the most during 2020, according to a report by UN Watch this week, a Geneva-based non-governmental organization that monitors the performance of the UN.

While UNGA resolutions are non-binding, they carry symbolic importance in world affairs.