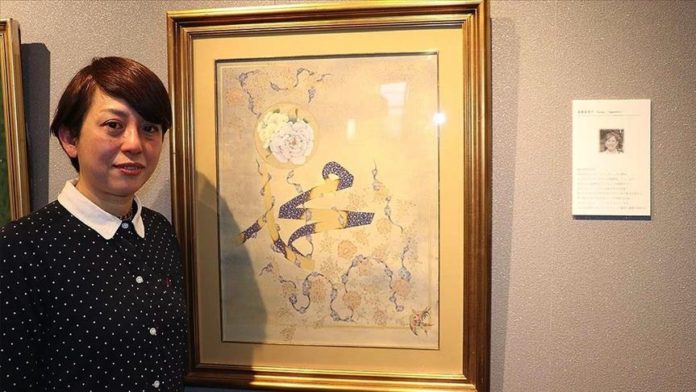 Japanese Fumiko Takahori set her heart on the traditional Turkish art illumination and brings Turkish and Japanese arts together.

Her latest artwork illustrates the name of the last Prophet Muhammad and the rose motive facing each other.

Speaking to Anadolu Agency, illuminator Fumiko Takahori said that she was impressed a lot by the name of Prophet Muhammad in Arabic, adding, “The most important feature of my artwork which illustrates the name of Muhammad is that it has revealed Turkish motives in Japanese style.”

She went onto say, “In this artwork, I painted Muhammad [pbuh] and indispensable rose motive facing each other,” adding that she tried to paint a part of heaven in her artwork.

Fumiko said that she encountered Turkish and Islamic motives the first time while reading an encyclopedia when she was a child and took an eager interest in them.

Having studied textile and textile design at Showa Women’s University, Takahori went to Istanbul where her interest in illumination grew deeper after she graduated from the university in 1988.

She said that she had given lectures for a year at a graphic design department of an advanced technical school in Ankara, after attending Prof. Munevver Ucer’s workshop, a well-known illuminator.

Expressing that she received a master’s degree in the same field from the Fine Arts department of Mimar Sinan University during her stay in Istanbul, Fumiko said that she wrote up a thesis, titled “Illuminated dîvân literature produced during the reign of Bâyezîd II.”

After returning to Japan, she continued her education and workshops on illumination and marbling arts.

“Since 2014, I have been continuing my illumination and marbling education at Yunus Emre Institute Tokyo and I held many exhibitions in Japan,” she said.

During the Asian Contemporary Fine Art Competition Award ceremony, she was awarded the Excellence in the Arts Award in 2019.

The exhibition, which displays Fumiko’s artworks, will open at Yunus Emre Institute in Tokyo on Feb. 10 and will remain open until March 15.