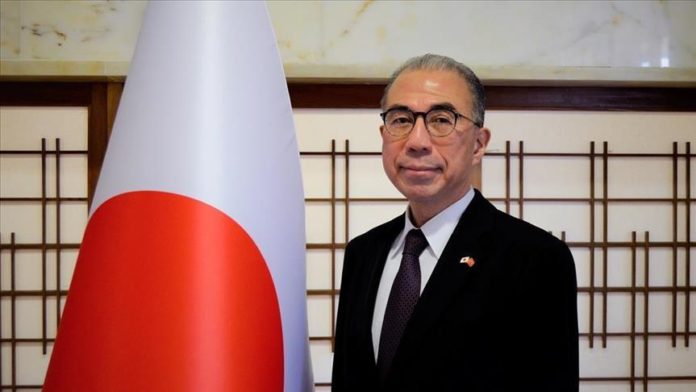 Japan’s ambassador to Turkey said Wednesday that the advertisement of Turkey’s strategical appeal in Japan was a priority for him as the country is an important trade and production center.

In an interview with Anadolu Agency, Kazuhiro Suzuki, who offered his letter of credentials to President Recep Tayyip Erdogan in December last year, commented on bilateral ties between the two countries and shared his first impressions of the country.

The Japanese diplomat sought to make the most of the COVID-19 pandemic, which triggered working at home policies in Turkey, by learning more about Turkish history during his work hours at home.

Suzuki said both Turkey and Japan’s histories were reflected in the national character of the countries which attached great importance to preserving their own cultural values while striving to adopt to modernization following the 1850s in particular.

According to Suzuki, there are a variety of similarities between the Japanese and Turkish people, including an awareness of family and social and individual discipline, and this is not a mere coincidence as both countries also share historical similarities.

Noting that the Japanese government has continued efforts to realize the vision of a Free and Open Indo-Pacific (FOIP), he said this vision could bring huge advantages for Turkey due to its geographical location connecting Europe, Asia and Africa.

The envoy further noted that the FOIP and Turkey’s “Asia Anew” policy complemented each other from a conceptual standpoint, adding his country – from a historical and geographical point of view – had relations with eastern, Southeast Asian, Oceanian and Pacific regions whereas Turkey had relations with the Middle East, Africa and Central Asian regions.

The Japan-Turkey Economic Cooperation Agreement, according to the ambassador, will pave the way for a more comprehensive and stable business environment through tax reductions and improve the transparency of commercial investment regulations, which will benefit both countries.

However, the main advantage of the deal will be the increasing interaction of the two nations, which is likely to lead to high-quality investments from Japan to Turkey, he said.

Regarding when the Turkish-Japanese Science and Technology University built in Istanbul would be operational, Suzuki said a council including six Turkish and four Japanese members were working hard to set the timeline and noted that the university would focus on research.

Also commenting on the earthquake-prone nature of both countries, he said the Japanese nation has not forgotten the assistance Turkey dispatched a decade ago when his country was hit by an earthquake.

The COVID-19 pandemic inflicted a heavy blow on the tourism interaction of Turkey and Japan, according to Suzuki, who said touristic interaction between the nations would help boost commercial investments.