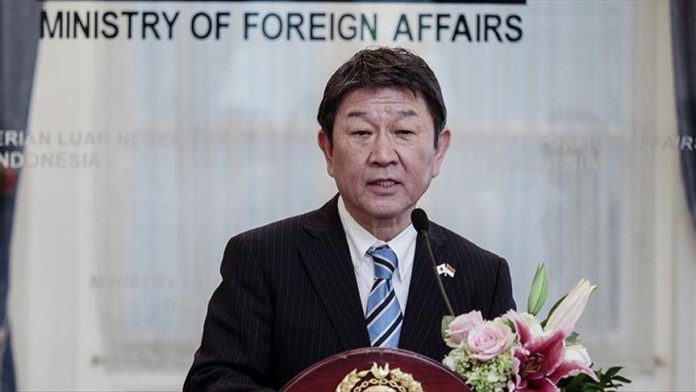 Japan will urge Myanmar’s military and opponents of the coup to engage in dialogue to resolve the ongoing turmoil, the Japanese foreign minister said on Friday.

The country would use sanctions, “if they lead to an immediate solution, but things aren’t so easy” in Myanmar, local broadcaster NHK News quoted Motegi Toshimitsu as saying at parliament.

This came a day after China said it supported the idea that leaders of the Association of Southeast Asian Nations hold a “special meeting as soon as possible to mediate” in Myanmar.

At least 536 people have been killed in the crackdown against pro-civilian rule protesters by the junta forces since the Feb.1 military takeover in Myanmar.

Tatmadaw – official name of Burmese military – soon after the coup announced a year-long state of emergency besides establishing its council to run the affairs of the Buddhist-majority country.

Many countries including the US, the UK, and the EU have imposed sanctions on Tatmadaw officials following the coup.

The Japanese foreign minister said he does not believe it “would be productive to impose sanctions just because other countries are doing so.”

“The opposing camps in Myanmar need to engage in dialogue and explore a path for a resolution, with the international community backing such efforts,” the Japanese foreign minister said.

In February, Tokyo had said it is considering to halt new development aid projects in Myanmar to pressure military coup leaders in the Southeast Asian country to release all prisoners and restore democracy.