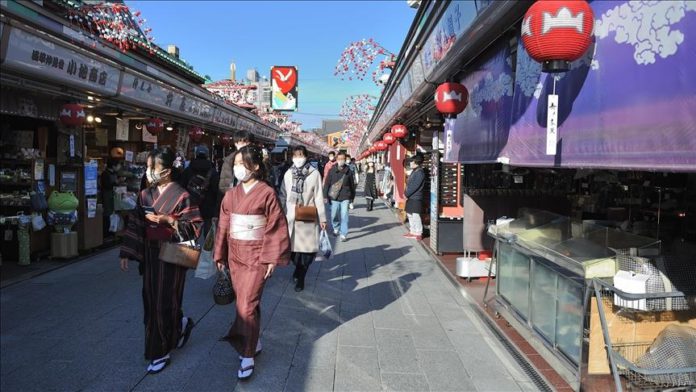 Japan’s capital hit a new record for daily COVID-19 cases on Wednesday as the government seems set to impose a fresh state of emergency.

A total of 1,591 infections were reported in Tokyo, which remains the hardest-hit area in Japan, raising its overall count to 66,343, Kyodo News reported.

Cases have surged in the capital over recent days and it now accounts for more than a quarter of Japan’s total of over 250,000.

The nationwide daily count also hit a peak of more than 4,900 cases a day earlier.

In view of the worsening numbers, Prime Minister Yoshihide Suga is expected to announce a state of emergency in Tokyo and three neighboring provinces on Thursday.

The emergency is expected to last for a month and likely to include measures such as stay-at-home orders and restricted hours for eateries.

Over 120 people in Japan died at “places other than medical institutions due to deteriorated health conditions after novel coronavirus infections,” according to a report by local news agency Jiji Press.

Police data showed there were 122 virus-related fatalities recorded at houses and other places between March and December 2020, the report said.

The highest number of such deaths was 36 in Tokyo, followed by Osaka with 25 and Hyogo at 11.