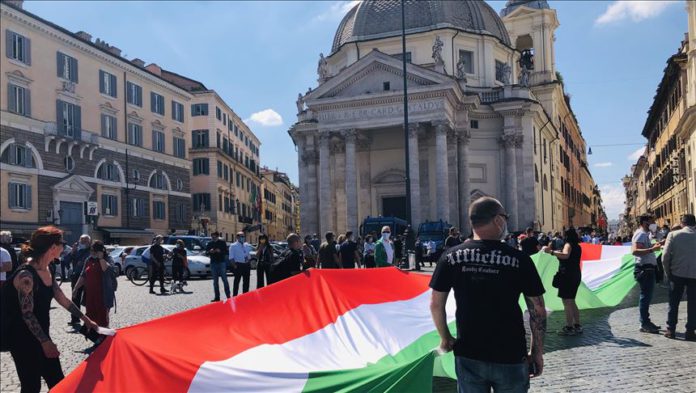 Thousands of right-wing protesters took to the streets of several Italian cities on Tuesday, demanding the resignation of the government, and accusing it of being unfit to handle the COVID-19 emergency.

The rallies were organized by right-wing opposition parties to give voice to what they called “the country that doesn’t give up” referring to Italian people hit hard by the pandemic and struggling to cope with its dramatic consequences.

It was the first time that a political protest took place on June 2, the day Italians celebrate the birth of the Italian Republic in 1946.

“There is no better way to pay homage to the Republic than to give voice to those who will not accept an Italy condemned to decline,” said Georgia Meloni, leader of the far-right Brothers of Italy party, as she joined the protest in Rome.

“This government has to quit immediately, because it proved to be totally incompetent,” said Alessandra, 54, unemployed. “People are simply asking to work, while politicians just talk about numbers.”

Later in the day, the same Roman piazza was occupied by about a thousand so-called “orange vest” protesters – inspired by the French Yellow Jackets, and led by former army general Antonio Pappalardo.

The movement, born spontaneously on social media, brings together heterogeneous instances, including conspiracy theorists, anti-vaccination activists as well as ordinary Italians suffering the economic damages of a two-month lockdown.

On Tuesday, Italian President Sergio Mattarella visited the northern town of Codogno, one of the first clusters of the virus outbreak — which in Italy has claimed about 33,500 victims, mostly concentrated in the northern Lombardy region.

In his speech, Mattarella defined the pandemic “a global nightmare.” But he called for national unity to allow the country to recover, both socially and economically, as it happened when the Italian Republic was founded.

“We find ourselves united in a common destiny, that moral union that has been the real cement of our country,” the president said.