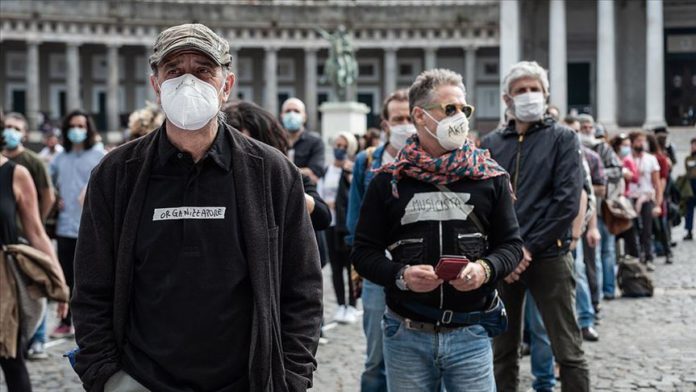 Italy on Monday reported 60 more fatalities from the novel coronavirus, bringing the death toll to 33,475, as the debate over the risks of reopening the country’s internal and external borders next week heated up.

The slowing trend in the number of deaths registered in the past week confirms that the peak of the crisis has been left behind.

The tally of active infections continued to fall on Monday, by 708, placing the total at 41,367.

The northern Lombardy region remains the epicenter of the pandemic, with victims rising to 16,131, almost half of the total in the country.

The government has confirmed that the last restrictions on citizens’ mobility between regions will be lifted on June 3, as the rate of contagions in all regions are reassuring.

But regional governors in southern Italy are worried that higher levels of contagion in the worst-hit northern regions — especially Lombardy and Piedmont — could risk spreading the infection.

Italy’s Health Minister Roberto Speranza admitted on Sunday that the government’s decision to allow travel between Italian regions starting on Wednesday is not “at zero risk” as the coronavirus pandemic is still a reality.

“To have no risk at all, we would have had to maintain a total lockdown for months, but the country would have not been able to stand it,” he said.

The minister also said it is “undeniable” that there are differences in the situation of different Italian regions and that “the North has paid the highest price.”

In light of those risks, regions will be allowed to track tourists as they arrive, to avoid a possible spread of the contagion.

Some regional governors are also planning to offer visitors to take tests on a voluntary basis and even include the tests in holiday packages.

Local authorities may also ask tourists to compile questionnaires with their sanitary information, which would be kept in the records for two weeks.