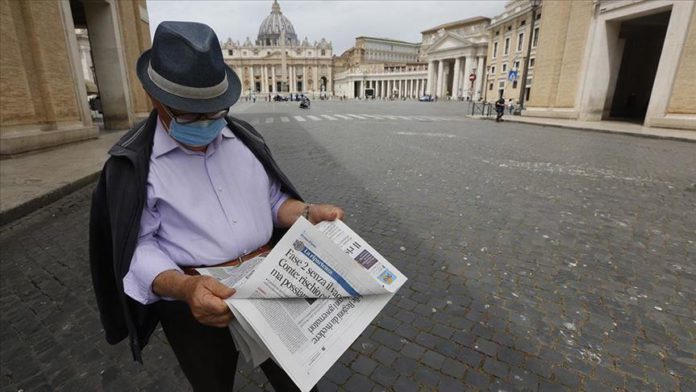 Italy on Friday reported 56 more novel coronavirus-related fatalities, bringing the country’s death toll to 34,223, as the infection continues to weaken.

The slowing trend in death numbers registered in May has been confirmed early June, showing that the worst of the pandemic has been left behind.

The tally of active infections again fell on Friday, with a decline of 1,640 that brought the total to 28,997.

The northern Lombardy region remains the worst-hit nationally. The number of fatalities in the region rose to 16,405 — almost half the nationwide tally — while 272 new cases were reported over the last 24 hours.

On Friday, Bergamo prosecutors — who are investigating the failed closure of two clusters in Lombardy in the early stages of the outbreak — questioned Italian Prime Minister Giuseppe Conte for about three hours as a witness in the case. They later questioned Interior Minister Luciana Lamorgese and Health Minister Roberto Speranza. None of the three is under investigation.

Regional authorities have accused the government of failing to activate “red zones” around the towns of Alzano and Nembro, among the first-hit by the outbreak.

At the end of the hearings, Chief Prosecutor Maria Cristina Rota told reporters that the interrogations happened in a “climate of full institutional cooperation”.

Conte’s government also remains under pressure for drawing up a credible long-term plan able to solve Italy’s longstanding economic problems, aggravated by the fallout from the pandemic.

The premier called a special summit, which starts on Saturday, aimed at bringing together all the main political and social stakeholders to discuss how to revive the Italian economy.

The meeting, to be held at Rome’s Villa Pamphili, will be deserted by the opposition parties, which downplayed it as a “useless show”.