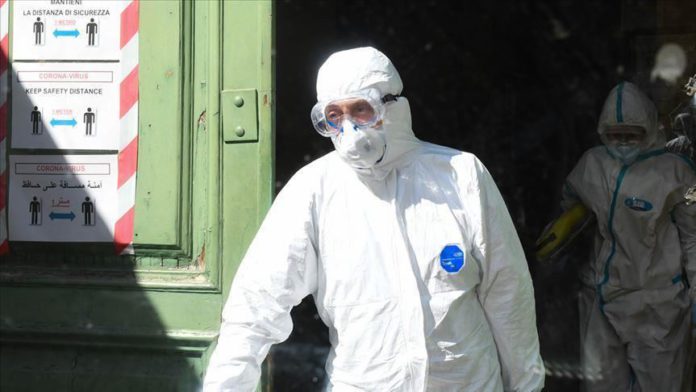 Italy on Thursday reported about 38,000 more cases of the novel coronavirus in the last 24 hours, as pressure mounted on the government from struggling hospitals asking for urgent aid to avoid collapsing.

According to Health Ministry data, new daily infections rose 15% from a day before, bringing the total of COVID-19 confirmed cases to 1,066,401, after the country surpassed the one million mark on Wednesday.

The ministry also registered 636 more deaths, the highest single-day increase since late March, when the country was under a strict nationwide lockdown.

The new figures brought the national death toll to 43,589, as a record number of 234,672 swab tests were performed in the past day.

The Italian government is still trying to avoid a second national lockdown — which would hit Italy’s fragile economy even further — introducing different restrictions at a local level, based on the levels of contagion risk.

The new rules, which came into effect last week, divided the country into three color-coded risk areas with varying levels of closures.

However, many experts and scientists have stressed that the measures adopted are producing only slow effects, while the situation could quickly deteriorate with the arrival of the flu season.

Hospitals across the country have been overwhelmed with COVID-19 patients who are filling regular wards and emergency rooms, making almost impossible for health care staff to treat other patients.

The hospitals’ struggle, which is even more severe in the poorer southern regions, became particularly striking on Wednesday, after an amateur video showing a suspected COVID-19 patient lying dead in the bathroom of a Naples hospital went viral.

The shocking images sparked a national outcry, with calls from citizens and institutions to impose tougher measures in the Campania region, which includes Naples and had been declared a moderate-risk “yellow” region.

“If we need to declare more red zones, we need to decide it now,” said Foreign Minister Luigi Di Maio in a Facebook video on Thursday. He added that – if needed – the army could be sent to critical areas to support the sanitary staff.

The government is negotiating with regions over an additional plan that would impose tougher restrictions locally and would be enacted in areas where new clusters have emerged.