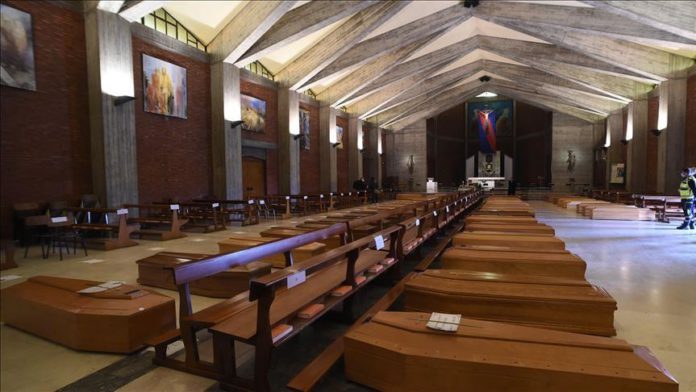 Italy on Thursday reported 274 new fatalities from coronavirus, bringing the total to 29,958, as the government faces rising internal rifts.

Data released by Italy’s Civil Protection Department confirmed the peak of the outbreak has passed, but experts warn that a relaxation in the lockdown could spark a rebound in the virus contagion curve.

The epicenter of the Italian outbreak remains the northern Lombardy region, where fatalities keep rising, reaching 14,745, almost half of the country’s total deaths.

The lockdown is scheduled to be further eased in gradual steps: first on May 18 for retailers, and on June 1 for bars and restaurants. Schools will stay closed until September, while travel between regions — except for justified reasons — is still banned.

The government insists phase 2 consists of “living with the virus” and that restrictions need to be lifted gradually. This means the announced steps could be pushed back or even canceled if scientific evidence shows the spread of the virus starts picking up again.

Many political and business associations, however, are already questioning this cautious strategy, and raising their calls for a quicker re-opening of specific activities and kindergartens.

As the signs of the impending economic recession have moved into sharp focus, Prime Minister Giuseppe Conte’s coronavirus honeymoon has ended.

The government is constantly blamed for delays in the arrival of financial aid, off-loading critical moves to task forces, and abusing its emergency powers. Divisions among the ruling parties are also emerging again, putting the government stability at risk at a time of crucial decisions.

Over 3.78 million cases have been reported in 187 countries since the virus emerged in China last December, with the hardest-hit areas being the US and Europe.

A significant proportion of COVID-19 patients — over 1.25 million — have recovered, but the disease has claimed nearly 265,000 lives, according to data compiled by the US’ Johns Hopkins University.