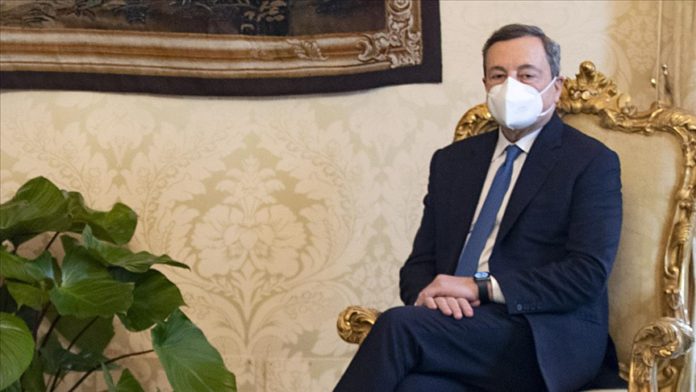 Former European Central Bank chief Mario Draghi on Wednesday accepted the challenging mandate to try to form a new government to lead Italy out of its health, social and economic crises.

As expected, Mattarella asked Draghi — an institutional figure with a high international standing — to try to resolve the political impasse into which Italy was plunged last month, just as it battles to contain a second COVID-19 wave and a deep economic recession.

Now, Draghi’s uphill task will be to rebuild a solid majority in parliament, able to support his leadership at a very critical time for the country.

In a brief speech to the press, the former ECB head acknowledged the challenges he will be facing.

“It’s a difficult moment and I responded positively to the president’s call,” he said. “Defeating the pandemic, completing the vaccination campaign, responding to the citizens’ needs and relaunching the country, these are our challenges.”

Draghi also stressed that his main aim will be to obtain a full backing in parliament, adding he was “confident” that a constructive dialogue with all parties would lead to a unitarian response to the country’s needs.

Super-Mario – the nickname Draghi earned globally for his key role in saving the single currency during the 2012 eurozone crisis – faces the dangerous divisions among Italian parties.

Mattarella’s decision to tap Draghi as the future head of a “national unity” government rocked the country’s political landscape, putting some of the main parties in a difficult spot.

“The immediate challenge for Draghi, who is no political novice, would be to secure a majority in a parliament where there is a deep unease towards technocratic solutions,” said Wolfango Piccoli, head of research firm Teneo.

“The existing parliamentary arithmetic further complicates the task ahead for the former ECB president,” he added.

Draghi’s success will mainly depend on the position taken by the ruling Five Star Movement and the opposition right-wing League, as both parties have long been hostile towards Draghi, seen as part of the European technocratic elite that they blame for Italy’s economic troubles.

The Five Stars’ initial reaction after Mattarella summoned Draghi was a negative one, with some of its leaders openly saying that the movement will never back a technocratic executive.

However, analysts noted that this position could change swiftly in the coming days, given the existing divisions within the embattled movement.

As for the League, its leader Matteo Salvini has hinted in the past that his party could consider supporting Draghi in exchange for early elections, meaning that the life-span of a possible Draghi government could only extend to the summer, when elections can be held.

The other right-wing parties have taken different approaches to a possible Draghi government. Silvio Berlusconi’s Forza Italia has said it would be willing to support Draghi, while the far-right Brothers of Italy party led by Giorgia Meloni has strongly opposed Mattarella’s decision, asking for early elections.

Draghi will now start consultations with different parties and then report back to Mattarella on the possible outcomes.

Russia uses disinformation to sell its own vaccine: EU